Saving more could be bad for economy

Saving more could be bad for economy

TESS VIGELAND: Chalk the Macy’s announcement up to a number out from the Commerce Department. Consumer spending fell for the sixth straight month in December. See, the financial crisis has convinced Americans to try something a little different — it’s called saving. But now this sudden attack of thrift is having dire economic consequences.

As Marketplace’s Steve Henn tells us, the worst part is that it could be habit forming.

STEVE HENN: It’s good to save some money. But when everyone starts saving at the same time, it can be an economic disaster. Goods pile up on store shelves, companies cut back on production and lay off workers. Then consumers pull back even more.

It’s a nasty little cycle. And all of a sudden Americans seem stuck in it.

Barbara Marcus works as a magazine editor in Washington, D.C.

MARCUS: My job should be all right but I’m like everybody else, a little worried.

Victoria Kirker: I feel secure, but at the same time you never know. . . .

So, like much of America, Marcus and Kirker started spending less and saving more.

Kirker: Just because of the economy and seeing everybody else losing jobs.

But Greg McBride at Bankrate.com says the unemployment rate is only 7 percent, however . . .

Greg McBride: The other 93 percent think they might be next.

Economically secure consumers should be buying more. But McBride says fear is a powerful thing. It quickly changes economic behavior and might even break America’s shopping habit.

McBride: Consumers can no longer think that they’re able to borrow their way to prosperity. That is a fundamental change.

And some behavioral economists say that now that so many Americans are saving, the trend could become self-reinforcing. Turns out when people make buying or saving decisions they often look more closely at what their peers are up to than prices or the economy.

In Washington, this is Steve Henn for Marketplace. 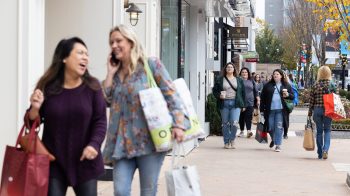