Finding the value in vintage

Finding the value in vintage

To you, it’s something to sit on. To antique dealer Chris Jussell, it’s…

He says new furniture is a like a new car: drive it off the lot, the value tanks. He says antiques are more like stocks: get in when the market’s down — like it is now — and you could see a payoff in the future.

Jussell: Oh golly, I can buy something that’s actually old and might eventually be worth something eventually for the same or less expensive then they’re going to find at places like Ikea and Crate and Barrell.

He says classic items that have maintained their price for years are going at auction for 50 percent less than they were six months ago. You think retail is priced to move? Try families who need to unload heirlooms fast.

Jussell: What you see are the three d’s: death, divorce, distress.

Naj Maloully: Go to the other side…

At an estate sale in Los Angeles, Naj Maloully and Jason Arnold move a table for a better view.

This type of table sells online for more than $400.

Maloully got her price. The seller’s house is in foreclosure.

I recently entered the fold of antique bargain hunters. When I moved to a new apartment, I went to Craigslist for furniture. Under “vintage” I saw a lot of junk, then a great mid-century modern couch. Same price as EKTORP — $500. It’s low-slung, bright blue with one long, padded cushion for the seat and another long cushion across the back. The dark wood frame holds this cool built-in table — black glass.

I asked antique expert Chris Jussell if I made a good buy.

Jussell: Actually, your voice went up when you talked about it with a lot of passion. You know what it’s worth, because you know what you paid for it, don’t you?

That made me feel good, but here’s something else about Jussell: he was the first host of the TV hit Antiques Roadshow. He knows value, and – later – I couldn’t resist.

I emailed a photo of the couch — it’s at marketplace.org — and asked what it might be worth in dollars. The upper end of his estimate was twice what I paid. Yes!

That created a monster. I wanted a price on all kinds of stuff. My kitchen table, my bedside lamp, my old Girl Scout uniform, badges and all. Apparently that’s a common urge right now.

Elizabeth Mason: People are now looking at “What do I have of value?”

Elizabeth Mason runs the Paper Bag Princess. It’s a designer vintage store in Beverly Hills. She says even if they have no intent to sell, people want to know if, in a pinch, they could liquidate their closet to pay the bills. She’s getting more calls to appraise client’s wardrobes.

Mason: People are looking at their clothes as a way to make money.

On my visit, I just happened to wear something of my grandmother’s: a necklace, silver with blue stones. Mason took a closer look.

Mason: I’d put it somewhere in the 40s and this looks like it’s lapis, but most importantly, it looks great on. What price would I put on that? Probably $600 or $700.

Really? Hands off my necklace, lady!

Knowing the market value changes the way I see things. I smile a little more when I fasten my grandma’s choker or settle into my couch.

Since I actually use them, they’re not really investments, but they could be later on down the line. As dealer Chris Jussell says about the appeal of the Antiques Roadshow, it’s all about potential.

Jussell: The possibility of going into your attic and winning the lottery.

And you may just decide to sit on or wear that lottery ticket instead of cashing in. 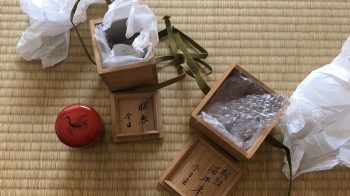