Bob Moon: Things aren’t any better for the “little guys.” The National Small Business Association, a Washington advocacy group, has a survey of its members out this morning, and the headline they put on it seems to say it all: “Outlook Not Good.” From the Entrepreneurship Desk at Oregon Public Broadcasting, Mitchell Hartman reports.

Mitchell Hartman: Half of those surveyed expect their sales to deteriorate this year. Those planning to cut jobs outnumber those planning to add them, by a third. Most say credit conditions are getting worse. Still, there’s something surprising buried here: inveterate, tenacious optimism.

Todd McCracken is the association’s president:

Todd McCracken: There’s always been a strikingly more optimistic outlook on the part of small-business owners about their own business than about the economy overall.

So while just 3 percent think the U.S. economy will grow this year, nearly two-thirds are confident about their own company’s prospects.

Is this just the “irrational exuberance” of entrepreneurs? Not exactly, says McCracken.

McCracken says they may be quicker to shed employees to stay afloat, but also be quicker to hire back up, when business starts to turn around. 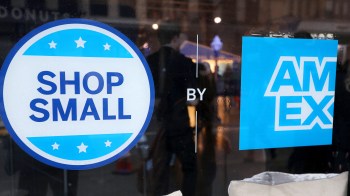