For the sake of the sockeye salmon

For the sake of the sockeye salmon

Scott Jagow: People who live in Alaska are voting today. One measure on the ballot would limit pollution from mining operations so it wouldn’t threaten salmon fisheries. But Some people say this is really about trying to stop the construction of a huge copper and gold mine. Emily Schwing reports from Homer, Alaska.

Emily Schwing: The proposed Pebble mine would be located at the headwaters of Bristol Bay, home to the largest salmon run in the world. The Bay supplies more than half of the sockeye salmon to the global market and brings $126 million to the Alaskan economy each year.

Catie Bursch has been fishing there for over 20 years:

Catie Bursch: Yeah, as far as balancing the economics, really all you have to know is a mine is a nonrenewable resources. They go in and get the minerals and then its done — it’s gone and you deal with the pollution.

John Shively is the CEO of the Pebble Mine’s Partnership Group. He says the statewide ballot initiative was drafted to specifically target his mine, and that’s unconstitutional.

John Shively: The proposal has been promoted as a way to stop the Pebble mine. If it can shut down Pebble, it can obviously stop or shut down other mines.

And any shutdown is a big concern in a state with a $4 billion mining industry. 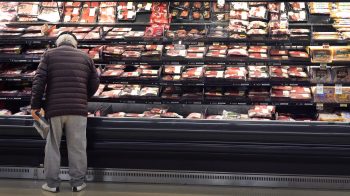 Inflation is a subjective number