Satisfying a taste for gold

Satisfying a taste for gold

KAI RYSSDAL: When the general inflation trend is up as it is these days in the mind of Ben Bernanke, a couple of things usually happen. The dollar rises. As it did today. And gold falls, as it did today. A couple of months ago it was $1,000 an ounce. Today it’s closer to $865, but still historically expensive. Which has put a crimp in some businesses that use the shiny yellow stuff. But in New York City one merchant’s found a tasteful way to adjust, as Andrea Mustain reports.

Andrea Mustain: There’s surprisingly little gold adorning Peter Sepp’s offices. A dozen or so small samples of gold leaf are mounted on one wall. Several photographs show past projects. But to really see some of Sepp’s finest work, he simply opens the blinds in his Manhattan showroom and points to a shiny dome in the distance.

Peter Sepp: That’s the Met Life building. That was done with 23-3/4-karat gold several years ago.

Sepp supplied the gold that covers it. The Met Life dome was one of his biggest projects. Sepp deals in gold-leaf for gilding, the ancient practice used to decorate everything from fancy picture frames to cathedral altars to casino lobbies.

Sepp: The Donald likes his gold a lot, and uses quite a bit of it.

Donald Trump has also used Sepp’s gold in his personal Manhattan apartments. But even The Donald’s extravagant ways can’t make up for the recent 20 percent decrease in gold leaf sales.

Sepp walks back to his tidy office, where he picks up a small booklet about four inches square. He peels back the paper, revealing a thin sheet of gold leaf. The bright square shimmers and moves on its own, reacting to the tiniest changes in air current. But even though each small sheet costs a little over a dollar, Sepp says it’s a great investment.

Gold, it turns out, is also digestible. And that’s good news for Sepp, because customers are developing a new appetite for gold — literally. Over the last five years, his sales of edible gold leaf increased by 50 percent. The same stuff on the Met Life dome is now being put in martinis, chocolates, pastries.

Last year, some of Sepp’s gold was included in The World’s Most Expensive Dessert — an ice cream sundae that sold for $25,000. But ordinary mortals with a taste for gold can find it at the grocery store. Well, a really nice grocery store.

Liz Collins runs the chocolate department at Dean and Deluca in Manhattan’s SoHo neighborhood. She says they sell two kinds of chocolates decorated with real gold, both of them popular.

Liz Collins: It definitely, you know, attracts your eye. I’m sure that a lot of people just want to eat it just because it has gold on it.

For $2.50 you can try a piece of chocolate infused with Kona coffee, topped with a swirl of gold leaf. There’s also a dark-chocolate gold Buddha for $25 covered from head to toe in gold.

Collins: It doesn’t really give it any type of flavor, it’s really for show.

Collins says it’s the chocolate that’s delicious. She should know. She tries every kind of chocolate they sell — gilded or not. It’s part of the job. Which leads to the most important question:

Mustain: Are you guys hiring?

Collins says there are some openings. It sounds like a golden opportunity. 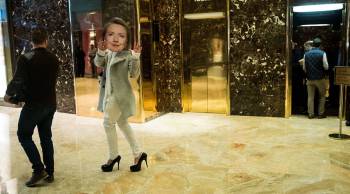 A little less punch at the economic party