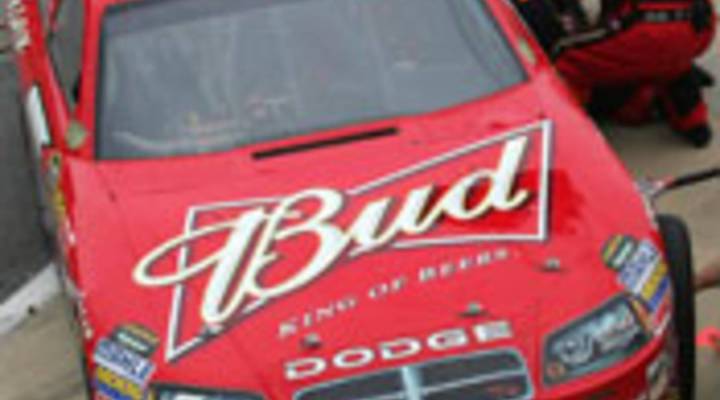 COPY
Anheuser-Busch is an all-American company, from its St. Louis headquarters to its sponsorship of NASCAR's #9 Budweiser Dodge. How would foreign ownership change its image? Todd Warshaw/Getty Images for NASCAR

Anheuser-Busch is an all-American company, from its St. Louis headquarters to its sponsorship of NASCAR's #9 Budweiser Dodge. How would foreign ownership change its image? Todd Warshaw/Getty Images for NASCAR
Listen Now

Kai Ryssdal: The dollar gained a little ground against the Euro today — probably all that talk Ben Bernanke’s been doing about inflation and the chance he’ll raise interest rates — but relatively speaking, the greenback’s still down deep in the basement, which makes American assets a pretty good bargain.

Foreign companies are making noises about buying New York’s iconic Chrysler and Flatiron buildings and for $46 billion, the heart of American beer.

Yesterday, the Belgian brewer InBev made a whopper of a bid for Anheuser-Busch, a deal that, if it goes through, would be one of the biggest foreign takeovers of American companies ever.

Stacey Vanek-Smith: Brands just don’t get much more American than Budweiser. Even the label is red, white and blue.

[Budweiser Ad]: You make America work and this Bud’s for you!

Or this Bud’s for Belgium?

Industry consultant Tom Pirko says the deal is likely to go through and he says even though InBev might say it won’t change the brand much, the brand will change.

Tom Pirk: What people don’t understand is these transactions change the culture of a company. Guys are going to come in and cut out a lot of the advertising, change the deals with the distributors, change the whole business formulation. It will be a different company.

But that doesn’t mean the InBev Bud deal will make a difference to Joe Six-Pack.

Rob Frankel: I think as long as people are getting their Bud and their Bud Light, they’re going to be darn happy.

That’s branding consultant Rob Frankel. He says U.S. consumers like to say they’ll buy American, but they don’t tend to put their money where their mouths are.

Frankel: Everybody likes to talk a good game, but they’re still buying Chinese imports out of Wal-Mart so the idea doesn’t seem to make it to their pocketbooks.

Frankel says with globalization, most people have no idea who owns what. Motown Records, Wild Turkey, Motel 6 all have foreign owners. Even Jerry Springer, that most American of TV shows, is partly owned by French giant Vivendi.

As for picking a patriotic beer, that could get really tricky if InBev gets its way. After all, Miller is part of British giant SAB Miller and Coors merged with Canada’s Molson last year.