Campaigns focus on the economy

Campaigns focus on the economy

Kai Ryssdal: Even though it means four — or maybe eight — years of not having to fill up your own gas tank, sometimes you have to wonder why anybody would actually want to be president.

As if managing two wars isn’t enough, whoever winds up in the Oval Office next January is still going to be facing a housing crisis. If he’s lucky , gas will only be $4 a gallon. The economy will be either stuck in or have just avoided a recession and the stock market… well, who knows.

Steve Henn: As we head into summer, American voters are downright edgy about this economy.

Carroll Doherty: All year long, we’ve seen economic attitudes as bad or worse as they’ve been in any recent election.

Carroll Doherty is at the Pew Research Center for People and the Press. He says the economy is number one on voters’ minds.

Doherty: In our most recent poll, 88 percent said it was very important to their vote.

This afternoon in North Carolina, Obama argued that approach has been tried and it failed.

Doherty at the Pew Center says right now, when it comes to improving the economy, more Americans trust Obama. He leads McCain on economic issues by 15 points.

Doherty: This is the ground that Obama wants to fight the election on.

But McCain is pushing back. Today in Richmond Virginia, he defended his proposal to suspend the gas tax. And the National Republican Party is releasing this ad:

[GOP Ad]: After just three years in the Senate, Barack Obama demonstrates his poor grasp of basic economic principles. While families face tough times, his ideas to raise taxes are out of touch.

And both presidential candidates are travelling through swing states hoping to convert anxiety about the economy into votes. 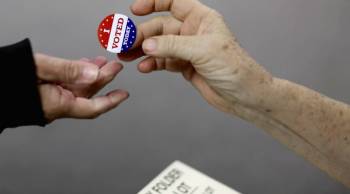