Malaria’s toll in dollars and deaths

Malaria’s toll in dollars and deaths

Renita Jablonski: Today is the first-ever “World Malaria Day.” Novartis is marking the day by cutting the price of its anti-malarial drug by 20 percent. The company offers the drug at cost to public health departments around the globe. It’s part of an agreement with the World Health Organization. Every year, malaria costs Africa $12 billion in lost productivity and investment. Africa Correspondent Gretchen Wilson joins us now from Johannesburg. Gretchen, how many people are affected by this disease?

Gretchen Wilson: Well, the disease kills more than one million people around the world every year. The majority of clinical cases are in Africa. In addition to that, millions more get extremely sick.

Jablonski: What does that mean for the economics of the continent.

Wilson: When people are sick they obviously can’t work, so there’s a huge economic impact, not just the loss of productivity, but the public health sector, as well. In the countries with a lot of malaria, four out of every 10 public health dollars go to malaria treatment. So, everything else being equal, if malaria had been wiped out 35 years ago, sub-Saharan Africa’s GDP would be one-third greater than it is today.

Jablonski: Wow. Is there any progress being made?

Wilson: Well, the fact is not a lot of companies see a profit to be made in fighting malaria, because firms who would develop a drug to treat it, for example, would probably face a lot of public pressure to give that drug away at cost. At the same time, malaria is by and large a poor peoples’ disease in the developing world. And that’s meant that there’s not really traditionally been a powerful lobby to advocate for malaria treatment and prevention. But that is changing, especially in the last few years. There’s a lot of high-profile philanthropists and economists who are starting to see how malaria is directly tied to poverty. So, they’re pushing it to the top of the global public health agenda.

Jablonski: So, with that, is an end to malaria feasible.

Wilson:Well, an end to malaria is very difficult, because it is so difficult to irradicate. What people are trying to do is trying to control the disease. One example is that the consulting firm McKinsey recently put together a plan to dramatically reduce the number of deaths due to malaria by simply, you know, giving people mosquito nets and spraying the insides of their homes. They say that if you put $2.2 billion dollars a years behind this, you could virtually eliminate deaths from malaria in 30 countries. $2.2 billion is about one-seventh of what Americans spend every year on bottled water. With the kind of figures that we’re talking about, it’s not a lot of money.

Jablonski: All right, Gretchen Wilson in Johannesburg. Gretchen, thanks so much, as always. 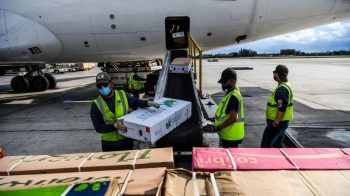