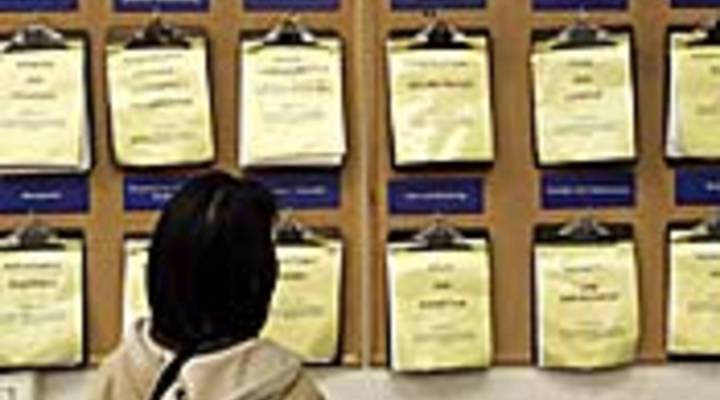 Teens have to hustle for summer work

A job seeker looks at a job listing board in Oakland, Calif. Justin Sullivan/Getty Images

Teens have to hustle for summer work

A job seeker looks at a job listing board in Oakland, Calif. Justin Sullivan/Getty Images

Stacey Vanek-Smith: Typically, about a quarter of teens get jobs in food service and a quarter in retail, but those numbers are expected to change a lot. The employment rate for teens could hit a 30-year low this summer. John Challenger is with employment consulting firm Challenger Gray and Christmas. He says, teenagers are at the bottom of the employment food chain, so they’re the first ones to get bumped when things tighten up.

John Challenger: Like other discriminated groups, they face tough times when it comes to jobs because they just don’t have many skills.

The jobs that don’t require highly skilled workers are getting a lot more competitive says Gary Chaison, a professor of labor relations at Clark University.

Gary Chaison: We’re going to increasingly see laid-off workers, particularly from the manufacturing sector, competing for those jobs. And probably getting some preferential treatment.

But wait, won’t teens have an edge because they’re willing to work for less money? Chaison says no. He says the tight job market means many service sector employees will settle for less than they earned last year.