Nationalization to save Northern Rock?

Nationalization to save Northern Rock?

Doug Krizner: The British mortgage lender Northern Rock was of the biggest casualties of the credit crunch. Since last summer, the U.K. government has been propping up the bank with $50 billion worth of public money.

For a while, it looked as though there would be a rescue from the private sector. I’m afraid not. And now the government is taking a drastic step to keep Northern Rock in business. From London, Stephen Beard reports on the move toward nationalization.

Stephen Beard: The government has abandoned the effort to find a private sector rescuer for Northern Rock. The two deals on the table were deemed inadequate.

Taking the bank into state ownership is politically risky. Ever since 70’s, many British voters have associated nationalization with failure and incompetence. There could be a lot of lawsuits, too. Nationalizing the Rock will likely mean that shareholders get next to nothing for their shares.

Robin Ashby speaks for some of those investors:

Robin Ashby: AS far as the shareholders are concerned, they are having their company stolen off them by the government, and the government will have to to compensate them. That has to be fair compensation. So there will be, almost certainly be court cases going on for years, right up to the next general election.

The biggest threat is to the public purse. The British government is now running a bank with $200 billion worth of mortgages on its books. The U.K. housing market follows the U.S. example, British taxpayers could foot the bill for billions. 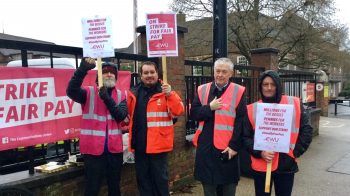 Crisis at Christmas: Strikes disrupt the U.K. during the festive season