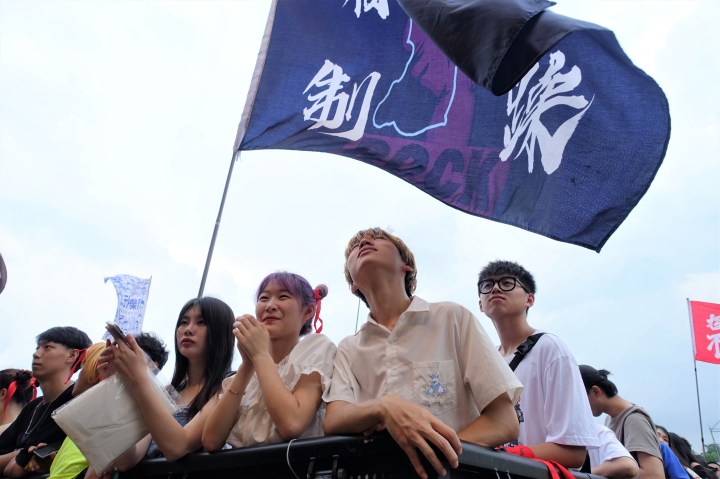 Hundreds of young people with black, pink and purple hair bobbed to the music as their feet sunk into the rain-soaked ground.

The free market appears to be thriving in China, where the Communist Party came into power in 1949. Yet, during a celebration of the party, which turned 100 this month, Chinese President Xi Jinping credited the country’s success to Marxism and used the word “socialism” 27 times, compared to only one mention of the term “market economy” during his speech.

“The capability of our party and the strengths of socialism with Chinese characteristics are attributable to the fact that Marxism works,” Xi said in a televised speech on July 1.

China’s private sector as a share of economic output and employment is bigger than the public sector.

“Private activity has steadily expanded over the last 40 or 50 years and now accounts for somewhere between two-thirds and four-fifths of the economy,” said Nicholas Lardy at the Peterson Institute for International Economics.

That is a big change from the disastrous Great Leap Forward, which triggered a human-made famine and the Cultural Revolution, when the government controlled 100% of all economic activity. In 1978, then-Chinese leader Deng Xiaoping spearheaded an economic policy called Reform and Opening Up.

The guitarist of the punk band Subs, Wu Hao, grew up in the 1980s, when most people in rural areas farmed their own lands, while those in urban areas worked at government firms — which in China are commonly referred to as “state-owned enterprises.” They provided workers with free housing, transport and coupons for things like food.

“My parents worked at a state-owned factory, which also provided hospitals, schools and kindergartens. It was like a small town,” Wu said. “Back [when I was growing up], my job prospects were to either get a state factory job like my parents or be a street gangster.”

By the 1990s, state-owned enterprises were losing so much money that China’s government drastically reformed the system.

“One of the big things that changed in China in the 1990s is that state-owned enterprises are no longer asked to guarantee employment,” said Andrew Batson, the China research director of Gavekal Dragonomics. “They are asked to guarantee a kind of a basic level of profitability and competence.”

Some state-owned enterprises were allowed to fail and shut down. The ones that survived cut benefits; tens of millions of workers were laid off.

“When I was a teenager, I didn’t like the [economic] reform because my classmates’ parents were losing their jobs and had a hard life,” Subs singer Kang Mao said. “I felt the communist values we were taught at a young age were collapsing. The state-run media only portrayed the reform as great for the country, but I did not feel that way. It felt like falling into a river.”

Around that time, Kang and Wu listened to rock music for the first time. There was a black market of discarded, partially damaged cassette tapes from the West, known as cut-outs.

“Cut-out cassettes were exported to China as plastic for recycling. To show they were not for sale, there were holes in the cassettes, though some of the tapes could still be played if you glued them back together,” Kang said.

She bought her first cassette from a vendor under a big willow tree at her university. It was the American rock band Nirvana’s “Bleach” album.

“Everything we knew about music back then was from these cassettes,” Kang said.

That set Kang and Wu on a path to be musicians, which used to be government jobs. To people like them, China today seems rather capitalist.

“From my vantage point, I cannot see any traces of the planned economy today,” Wu said.

It may appear that way to consumers in China because they interact more with the low- to mid-tier supply chain section, which tends to be mainly private companies.

The picture looks very different further up the supply chain.

“The [government] sector controls more of the upstream industries. When you look at natural resources, strategic sectors [such as] aeronautics and astronautics, they are mostly owned [by the government],” Wang Dan, chief economist of Hang Seng Bank in China, said.

In the music industry, artists, record label companies and music-streaming platforms are all from the private sector. However, television and radio stations that broadcast music are still government owned.

“A punk band like us will never have the opportunity to appear in the government-run media,” singer Kang said.

Years ago, she said they were invited to perform at a music festival in Manchester in the United Kingdom.

“We accepted and agreed to the terms,” she said. “We didn’t hear from the festival organizer again.”

Later, she was told a Chinese propaganda department found out about the invitation and intervened by offering the U.K. festival organizer a Chinese orchestra under its management to perform instead.

Since China’s President Xi Jinping came into power in 2012, the Chinese leader has advocated for a bigger public sector, Lardy of the Peterson Institute said.

“The bureaucrats [then] merged a lot of the biggest state-owned companies into an even smaller number of companies, further reducing competition,” Lardy said. In the last five years, he said, the share of bank credit made available to the public sector has increased.

“The only real explanation is that Xi sees state-owned companies as an element of control and power.”

Is China’s public sector too big?

It is not unusual for national governments in market economies to own companies.

However, the West does not have as many state-owned enterprises as in China, according to Batson.

For example, he said a country as socialist as France has never had state-owned enterprises exceed 13% of the country’s gross domestic product.

“The share of state-owned enterprises in China’s GDP is double or triple what any Western nation has ever experienced,” Batson said.

In addition to state-owned enterprises, there are state-controlled and state-backed firms run as private companies.

For example, when the Trump administration restricted exports of U.S. technology to Chinese companies, there were fears of a microchip shortage in China. The Chinese communist government stepped in and worked with semiconductor companies, which were mainly privately owned.

“The [Chinese] government is now channeling funds to these private companies in order to boost their capacity and to help them become more innovative,” Lardy said. “In many cases, this is taking the form, not of just free money, but the [government] would become an equity investor in the company.”

Factoring in state-owned enterprises, state-controlled and state-backed firms, analysts like Wang from Hang Seng Bank estimate that the public sector is bigger, accounting for 50% of China’s economic output.

The public sector is less efficient than the private sector, she said. However, efficiency and profits are not everything.

China’s government also uses these public companies to help stabilize the economy in times of crisis. During the height of the COVID-19 pandemic, government-owned factories were given a political mission to implement strict virus protection measures and resumed work first.

“That had helped China to become the manufacturing center very quickly, when the rest of the world was pretty much in a very big recession,” Wang said.

She said China’s public sector, while less efficient than the private sector, has internal mechanisms to deal with some of the inefficiencies.

“The government behavior is more of experimentalism. It sets up pilot zones [to] try little things and then try to make that [into] a model to make the rest of the country learn from,” Wang said.

Wang said there is a lot of competition between provinces and different cities.

While the public sector’s share of economic output continues to fluctuate, its share of employment in China is dropping.

“About 90% of the growth of employment since 1978 has come in the private sector,” Lardy said.

People in China have more career and consumption choices than any previous generation. The government still subsidizes a lot of areas of daily life to keep prices artificially low, such as food staples like pork, rice and salt; water, heat and electricity; transportation like railway, subway and buses; and internet and mobile data plans. China’s government also subsidizes farmers in rural areas and is refining a pension and health care scheme for all workers.

However, things like music, which used to be controlled by the government, are now mostly a free market.

The Midi festival, which began just over two decades ago, is one of China’s oldest rock music festivals and charged between $45 and $50 a day for tickets. The three-day festival was held at Jiangsu’s Liyang, which is a county-level city eager to spur economic activity locally. The local government even allowed spectators to camp on the festival grounds.

Live performances are a lifeline for independent bands like Subs. The band has toured in Europe and even performed in the United States at the South by Southwest festival. Last year, Subs was only able to perform twice because many live venues were closed due to the COVID-19 pandemic.

As Subs performed at the Midi festival, some 20 police officers watched over the audience.

The band said it was told to talk less to the crowd between songs and to avoid anything political. But censorship isn’t the group’s biggest concern — it’s the music fans.

“If variety television shows show hip-hop groups, then the audience will like hip-hop,” Subs’ drummer De Sifan said. “Chinese consumers tend to accept music they are taught to like, and rock is not the trend right now in China.”

Even if Subs is able to attract young fans, those fans do not stick around.

“Art in China is seen as useless. Some fans grew up with us, but left when they turned 30 because they needed to get married and raise children,” Kang said. “Older fans have to worry about cars and apartments.”

Housing and transportation used to be free and provided by the government. Now that Kang’s older fans need to spend more on paying for these necessities, she said they have less money for nonessential items — including live music shows.