KAI RYSSDAL: Today, the Bush Administration announced the most significant overhaul of the agricultural guest worker program in 20 years. The general idea is to make it easier and faster for farms to hire workers from other countries.

From the Americas Desk at WLRN, Marketplace’s Dan Grech reports.

DAN GRECH: U.S. farms rely on undocumented labor. More than half of the 1.2 million farmworkers in the U.S. are here illegally, but with a crackdown on illegal immigration, farms are left without workers and crops are rotting in the field. Today, the Bush administration submitted a 186-page plan it says will streamline the foreign guest farmworker system. Bruce Goldstein directs Farmworker Justice, an advocacy group. He says the proposed overhaul of the H-2A visa system is essentially a handout to agribusiness.

BRUCE GOLDSTEIN: The proposal would slash the wage rates of U.S. workers and guest workers, eliminate housing requirements, reduce government oversight and in other ways would harm farmworkers unnecessarily.

The National Council of Agricultural Employers says it welcomes improvements on the “inefficient and unaffordable” H-2A program, but council president Michael Gempler says for the overhaul to work, bureaucrats will need to operate on a farm’s timetable.

MICHAEL GEMPLER: If you have cherries that are highly perishable and need to be harvested, you can’t wait while the government shuffles the papers around.

Critics of the Bush plan say a better solution is already available. A bill in Congress called AgJOBS would create a new guest worker program that would allow laborers to eventually become citizens, but the bill is stalled in the Senate as the war over illegal immigration rages on. The public can comment on the Bush administration’s proposed changes over the next 45 days. 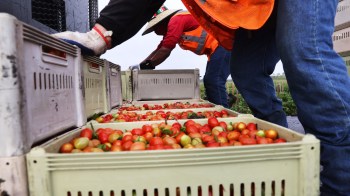