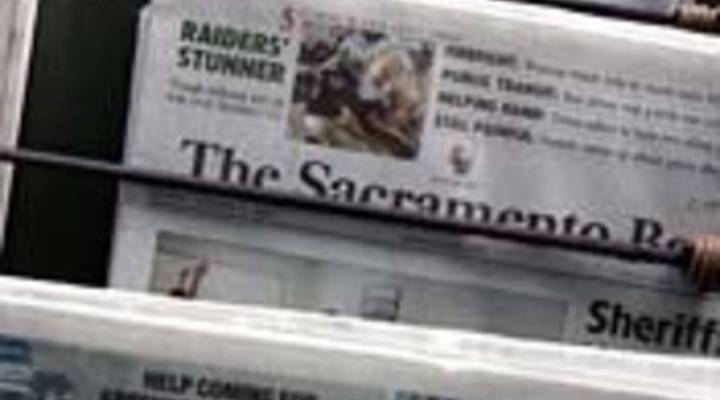 Scott Jagow: What’s black and white . . . and red all over?
Try the newspaper industry. The red ink is piling up fast as advertising revenues keep falling. Real-estate companies are pulling out for obvious reasons. Gannett says its flagship, USA Today, will see revenues fall 7 percent this year. Stacey Vanek-Smith looks at where the business is headed.

Stacey Vanek-Smith: Newspaper circulation has been dropping for decades. More people are going elsewhere for their news.

The flailing economy has taken that situation from bad to worse, says Tom Rosenstiel, director of the Project for Excellence in Journalism:

Tom Rosenstiel: What I hear from publishers and editors is: there’s no more fat to be trimmed. We are now into amputation.

Profits have been shrinking the last couple of decades. But Rosenstiel says newspapers aren’t dying — they’re transitioning into the digital age.

Rosenstiel: Newspapers I think should be in the position of saying, the economics of delivering news this way will sort itself out. But you will kill that golden goose if you cause us to shrink out newsrooms before the economic model is developed.