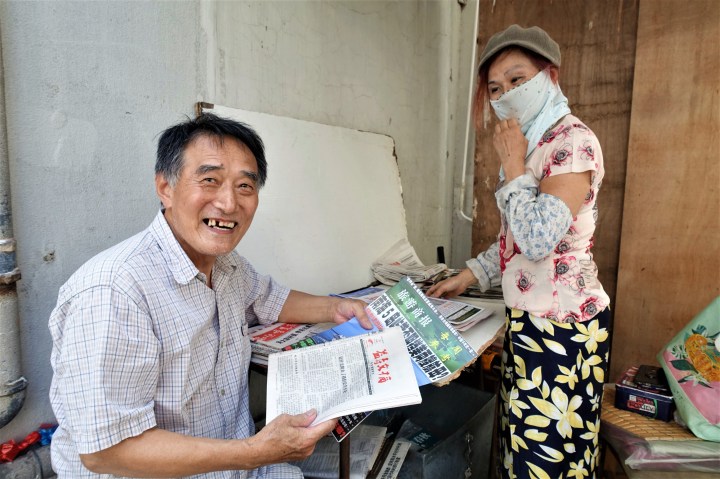 COPY
Gao Dongde, left, has been buying newspapers from Qu Yali's family for decades. He no longer lives in the neighborhood, but he still comes to pick up his newspapers from Qu because there are no newsstands near his current home. Charles Zhang/Marketplace

Gao Dongde, left, has been buying newspapers from Qu Yali's family for decades. He no longer lives in the neighborhood, but he still comes to pick up his newspapers from Qu because there are no newsstands near his current home. Charles Zhang/Marketplace
Listen Now

Back in April, Marketplace reported on the slow green trains to service the poor in China, and the story was picked up by one of the country’s government-run newspapers called the Global Times, translated into Chinese and published.

I was alerted by a friend who saw the article while casually flipping through the newspaper offered on a domestic flight. I figured it would be nice to have a hard copy of the story, but finding a newspaper in Shanghai, China’s financial capital, is not easy.

Red news booths on sidewalks have long been regarded as part of Shanghai’s beautiful cityscape. At its peak, industry insiders say there were more than 3,000 newsstands dotted across the city. However, an online search for newsstands in April yielded only 10 results, and some were out of date.

Marketplace news assistant Charles Zhang went to one of the locations, only to find an empty street corner. He visited six kiosks before arriving at a newsstand where the man running the place not only sold the Global Times newspaper but also agreed to an interview.

I immediately hopped into a cab to join Zhang. Along the way, I told the taxi driver about my newsstand mission, and he seemed amused by the prospect.

“Very few people buy newspapers these days. Everything is accessible through the cellphone,” he said.

The last time he bought newspapers was three years ago. He prefers to get information from social media like Douyin, as TikTok is known in China.

It is more entertaining, he said, unlike the government-run media.

When the Global Times republished Marketplace’s story, it translated the paragraphs on how the government trains help the poor while cutting out passengers’ references to inflation or the high cost of living.

“I don’t read domestic Chinese news because all government-run news in China is fake,” said the taxi driver, who refused to give his name out of fear of government retaliation. “Because you are foreign media, it’s hard to say what would happen.”

Wariness of speaking to foreign media has become rampant since the U.S.-China trade war began in 2018, even on topics unrelated to trade or diplomacy.

Once I arrived at the newsstand, which was fully stocked with dozens of newspapers and magazines, Zhang introduced me to the newsstand man.

I turned the microphone to him and asked: “Do you stock newspapers from across China?”

The man, who initially told Zhang he was happy to do an interview, recoiled from the microphone.

“You want to do an interview? You need approval from my leader,” he said and pointed us next door where his “leader” turned out to be his parent company, China Post.

We talked with a skinny man who said he had no power to give us interview access and handed us the contact number of another company official, without telling us which department that person worked for. Applying for interview access in China for government-run or government-linked firms like China Post is rarely straightforward.

Local Chinese news outlets have previously interviewed this same newsstand, which is usually a signal that foreign media might also be able to get coverage access.

However, the newsstand man told Marketplace’s Zhang that the story of disappearing newsstands is a sensitive one for his bosses.

“He said his bosses don’t want to make this story too big,” Zhang told me. “Because there used to be so many [newsstands] that made it convenient for citizens [to buy newspapers], but now there are so few.”

The birth of newsstands is tied to a big economic reform policy shift in Communist China during the late 1990s, when poorly run, state-backed firms were allowed to close. It left scores of workers without jobs.

Shanghai’s government introduced a series of measures to help the newly out-of-work, which included setting up some people with newsstands. However, officials have since stopped supporting the stands, and they have all but disappeared in Shanghai.

Local news reports indicate newsstands have outlived their use, with the rise of fast and affordable mobile internet. Similar stories have emerged from other Chinese cities.

Newspaper circulation between 2010 and 2019 in China dropped by 37% to 32 billion newspapers a year, according to government statistics. It is a cut-throat business. News outlets often republish articles in full from other media online. Foreign media outlets, such as Marketplace’s stories, have been translated and republished without permission.

As for newsstand owners, some survived by selling drinks, ice cream and snacks, such as tofu. One reportedly transformed his newsstand into a veggie stall. Street stalls were becoming an eyesore for some city residents. In 2018, Shanghai shut most of the stalls, including, the newsstand run by Jia Jinwu.

He said the newsstands were aimed at out-of-work government employees in their 40s and 50s, who were close to retirement age, and these were highly privileged jobs.

“Not everyone could open a newsstand,” he said. “When the government decided to close them, we had to go along with it.”

There was a bit of pushback.

“When newsstands were demolished, many elderly people called [the mayor’s hotline],” said Qu Yali, another newsstand owner. “A lot of old people were sad and crying when our booth was gone. That is why I took over my parents’ business and kept selling newspapers.”

At the time, Qu, herself a retiree, was teaching Latin dancing in her spare time. She left that behind once she took over the news business to service customers, who are mostly in their 80s and 90s and do not have good eyesight to read news on their cellphones. Without government support, her current newsstand is merely a table tucked in an alleyway.

“When the news booths still existed three years ago, the newspapers were sorted and delivered by a company, and unsold copies could be returned,” Qu said. Now she has to pick up the newspapers herself and she cannot return the remaining copies.

“I have to shoulder the losses now, so it’s a much tougher business model,” she said.

We found one other remaining newsstand, but the owner did not agree to speak to us. We did not get permission to interview the first newsstand we found either. China Post stopped returning our calls after three weeks of back-and-forth contact.

There is still a market for newspapers — old ones. Some newspaper collectors sell off vintage copies online.

A group of 11 gathered last month and we stopped by. However, as soon as we introduced Marketplace as an American media outlet, no one would agree to an interview.

Then, the collectors lectured news assistant Zhang for about 10 minutes.

“No political news,” one said. Zhang explained that this was a story about newsstands, not about politics.

“Everything is political,” another collector said. “Do good news about China.”

Back at Qu’s newsstand, her longtime customers are grateful she is still selling newspapers.

Gao Dongde said he needs to read at least two newspapers a day. “I don’t feel well if I don’t read newspapers,” he said.

Then another customer heard we were an American news outlet. He told Qu to be careful and the jovial mood changed. Could what they’ve said be misinterpreted as criticizing the Shanghai government?

“Will there be negative consequences if this story is published in the U.S.?” Qu asked me. “Will it cause me problems?”

Her biggest fear is that by speaking to me, her newsstand could be shut down a second time.