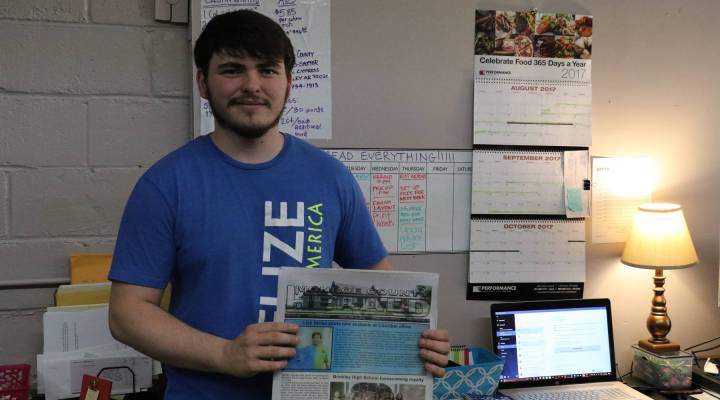 In a small Arkansas town called Brinkley, Sandra Kemmer is volunteering in a local cafe to promote the area’s economy by giving out rice products on metal trays.

“Hey ya’ll. You can have some cookies when you come back, it’s rice month,” she tells a couple passing by her stand.

Agriculture is the center of life here, but for decades rural Arkansas towns like Brinkley have been dwindling and with them a linchpin of daily life, the town newspaper.

With spotty internet in Arkansas’s Delta region, Kemmer uses the paper like a calendar or daily planner, so when the local Brinkley newspaper’s building burned down in 2016, she was worried.

“It was just really, just almost devastating. You know, we couldn’t believe it. What are we going to do? No paper. What will we do? You know, how will we keep up?” she said.

But then a 19-year-old college student named Hayden Taylor bought the local paper, the Brinkley Argus, for $5,000. Brinkley rallied around him and subscriptions, which cost $35 a year, nearly doubled to 1,700.

Editor, publisher, and owner Taylor is now 20. Next year, he hopes to expand the paper, renamed the Monroe County Herald, by adding an online version, since it’s only published on paper now.

The level of support shown by the community for the paper surprised even Taylor. “I don’t know what motivated everyone to say so loudly that ‘We want the paper. We want to keep the paper in Brinkley. We don’t want to lose it,’” he said.

Running a small-town newspaper is not easy and in many ways is a labor of love. Taylor said he takes home $250 a week, an income he supplements with his savings. He said he lives rent free in a building his family owns.

Tom Larimer is head of the Arkansas Press Association, which helps bring in ads for its member papers. He said for a small town, a newspaper is like a school. It is part of the local identity.

“When you lose your school, it’s very traumatic for a community, because you have generations of people that have gone to that school, and now it no longer exists. That’s a part of that community that will never come back,” said Larimer.

In over a decade, the state has lost about 12 of its 130 local newspapers. Three closed this year, including the White River Journal. It’s located in another Delta town, Des Arc, where 95-year-old Dean Walls stopped publication of the 110-year-old family paper this August. “Most people said it’s a sad day. That’s what we heard from a lot of people. It’s a sad day when the journal quit coming,” she said.

Walls ran the journal for 72 years. At one point, she and her late husband worked in a building with no air conditioning, using an old-fashioned hot lead press.

“Mother still has scars on her arms from when the hot lead would bounce out of the pot onto her arms,” said Walls’s 78-year-old son Charles, a retired architect who helps with the paper.

“We just can’t do what needs to be done, and I don’t want to do a sorry job. We’ve had a good newspaper with a good reputation,” said Walls.

But while the newspaper closed, she and Charles are now working on a free, e-mail version with some news and information.