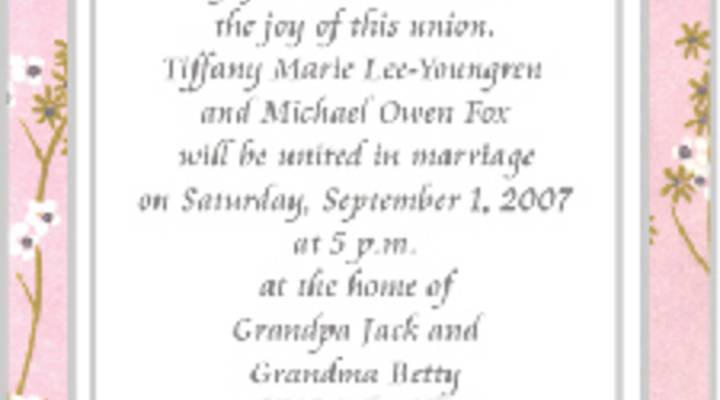 COPY
Tiffany and Mike's wedding invitation. The couple saved money by printing out their own: 150 for around $200. The couple are set to wed on Sept. 1, 2007. Michael Fox

Tiffany and Mike's wedding invitation. The couple saved money by printing out their own: 150 for around $200. The couple are set to wed on Sept. 1, 2007. Michael Fox
Listen Now

TESS VIGELAND: Today, we turn the page for Chapter Four of our financial fairy tale. Our hero and heroine, Michael Fox and Tiffany Lee-Youngren, will tie the knot in just a few weeks on September 1. We’re following them as they walk toward the aisle, to have and to hold, through sickness and health and revolving credit-card debt.

We’re back in the kingdom of Encinitas, Calif., where Mike and Tiffany are hosting a dinner for their wedding officiant, Ben Kierulff, and his girlfriend Liz.

Ben had a little show-and-tell for the couple: his newly-minted license to conduct the marriage.

BEN KIERULFF: So I did this today, in fact, so you can see it says Reverend — “Benjamin Kierulff has been ordained this Saturday, the 14 of July. So yeah, I just went to the link that you gave me.

VIGELAND: TheMonastery.org. Tiffany’s known Ben since kindergarten. She and Mike didn’t want a typical church wedding, so throughout a meal of crepes filled with zucchini, tomatoes and goat cheese, they went over the ceremony that will take place at her grandfather’s home.

Now that they’d met with their officiant, I asked whether they had any plans to meet with a lawyer.

TIFFANY LEE-YOUNGREN: Everyone keeps telling us we should. It’s kind of funny, the people that have told me to sign a pre-nup, for the most part, have been bitter divorcees. I don’t really like the idea, because it seems like during this time of celebration and joy, that would put a big damper on things. But I do know that, I think the statistic is that 50 percent of marriages end in divorce. So, you know, we’ve got a 50/50 chance of staying together. So a lawyer kind of makes sense.

MICHAEL FOX: It doesn’t matter to me. Like, I . . . lawyer, whenever I hear lawyer, I always think money. So when I think, “Hey, I’m gonna be paying how much for you to write up a thing that I may never use?” It’s uh . . . I guess it’s, depends on how, what the costs would be.

LEE-YOUNGREN: I thought about just composing something that, you know, delineates what our assets our individually. But I guess we have to do a little more research and find out before the big day, and that’s only six weeks away, so . . .

FOX: Which is a good question. Because even though it’s called “pre-nuptial,” I wonder if you could actually do it after your wedding.

VIGELAND: You can. It’s called a post-nuptial.

FOX: There you go. So that seems like an option too, because we really are busy on a day-to-day basis.

VIGELAND: Last time we talked, we met at the wine store. You were picking out your wines, then you were on your way to taste your food. How did that go?

LEE-YOUNGREN: It didn’t go well. My parents had chosen a place that they were told would be a very good deal. And we were completely willing to go along with it, until we tasted the food, and neither one of us liked the food. So we asked my parents if we could try some other places, and were firmly told no. Then we found out that my parents had already put down a deposit on that restaurant.

VIGELAND: And this is, we talked last time about the fact that, Tiffany, your parents are, were planning to pick up the majority of the tab for the wedding.

LEE-YOUNGREN: Yes. They’re still planning to pay for the caterer and the rental vendor. But now the situation has changed, and we’re picking up the tab for a lot more than we had anticipated. And it’s been tense, and things aren’t’ going as smoothly as we had hoped, but I think that a lot of people probably go through this. It’s a very stressful time.

VIGELAND: If you’re now going to be paying for a larger chunk of the wedding than you expected to, are you prepared for that? Do you have the money?

LEE-YOUNGREN: We are very fortunate, because I just got a job freelancing that will pay me several thousand dollars. That was just a matter of great timing, because otherwise, we would have been putting it on credit cards, or Mike’s parents have offered to pay for whatever we need. But I’d rather, I would rather not have them pay.

VIGELAND: So with six weeks to go, the inevitable stress has set in. But they did want to address one of our listeners, who doubted their claim that their wedding would cost way less than the $28,000 average.

LEE-YOUNGREN: We’ve not been hesitant at all to ask our friends for help. And we have a family friend who’s a former AP photographer who’s gonna be doing our portraits and photos. And we have my mother’s brother coming in as the DJ. We also have a friend of the family who will probably be helping us with the flowers. My mom is making my wedding gown. I think the gown was upwards of $5,000, and really now it’s just the cost of the fabric.

VIGELAND: They also printed their own invitations: 150 of them for about $200. We’ve got a photo on our website.

Next time, marriage, money, and secrets. Oh, and the honeymoon! This is Marketplace Money from American Public Media.