KAI RYSSDAL: There’ll be an all-star cast tomorrow night at a Democratic fundraiser outside Washington. Speaker Nancy Pelosi and chairmen of the ten most powerful committees in the House of Representatives are scheduled to headline the event. And even though the presidential election’s still 18 months away, corporate America is already placing its bets with well-timed donations. Commentator Jeff Birnbaum points out it’s the same story as before…just a different cast of characters.

JEFF BIRNBAUM: The asking price for access to Nancy Pelosi and all her colleagues is $28,500 a couple. That’s one of the steepest prices ever charged since new campaign finance limits were imposed five years ago.

It wasn’t supposed to be this way. Remember Democratic Party Chairman Howard Dean railing against Republicans last year for selling access to their chairmen? The “intimate briefings” they gave to big donors was part of what Democrats derided as the GOP’s “culture of corruption.” If the Democrats ever took charge, they promised, all that would change.

Well, it hasn’t changed. Actually, it’s gotten worse. Democratic campaign committees are systematically showcasing a whole series of Democratic chairmen at fundraising receptions as a way to lure lobbyists’ money. That’s right, lobbyists are being asked to donate to the lawmakers who are in charge of the legislation that their clients care most about.

It’s a familiar formula, for sure, and it certainly works — millions of dollars are pouring into Democratic coffers. But it’s not what the Democrats led voters to believe would happen if they won the majority.

They’re not apologetic. They say they don’t promise to do anything specific in exchange for all that money — except to perpetuate their now-fragile majority in Congress.

And it is fair, I guess, to claim that turnabout’s fair play. Republicans stayed on top on Capitol Hill for a dozen years by using their majority status to get the bulk of special-interest dollars as well.

But if voters were seeking change when they swept the Republicans out of control last November, the chances that they will get it are slim to none judging by the continuation of this money-for-access routine.

I guess it’s “Meet the new boss, same as the old one”— at least as far as the money game goes.

RYSSDAL: Jeff Birnbaum is a columnist for The Washington Post. 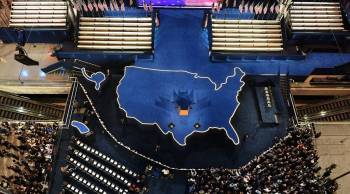