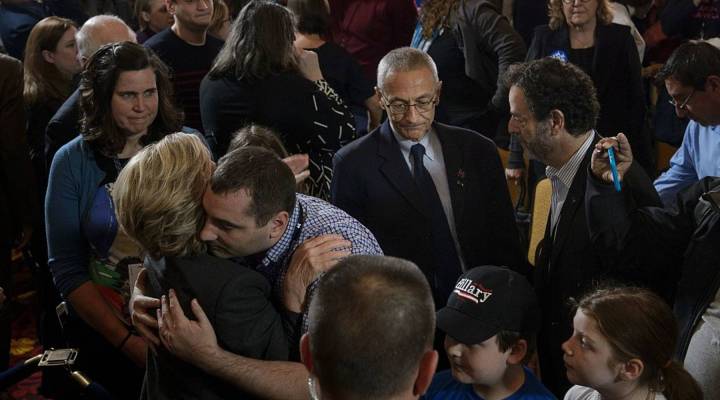 COPY
Hillary Clinton greets staff and supporters after addressing them at the New Yorker Hotel after her defeat in the presidential election. BRENDAN SMIALOWSKI/AFP/Getty Images

Hillary Clinton greets staff and supporters after addressing them at the New Yorker Hotel after her defeat in the presidential election. BRENDAN SMIALOWSKI/AFP/Getty Images
Listen Now

Democrats in the House of Representatives have a big decision to make as they choose a House leader. Do they go with the old guard and re-elect Nancy Pelosi or turn to a new face? Ohio Rep. Tim Ryan is challenging Pelosi for her top spot in the leadership, as the Democratic party tries to figure out what went wrong on election night. Does their brand need major reconstruction? Or just a minor retooling?

To find out, we went to the streets of Washington, D.C., which voted overwhelmingly for Hillary Clinton, and asked people, “What do you think of the Democrats’ brand?”

“It’s a party for the people, higher taxes, things like that,” Brian Wood said.

David Mann commented, “the Democrats are inclusive for all people, I think. Include all people.”

“Right now, I don’t know,” mused Daphney Murphy. “This whole election has made me think a lot.”

Wood is a Republican. Mann and Murphy? Democrats.

Murphy is doing some serious soul searching. She’s a millennial, exactly the kind of person the Democrats need to fire up. But she’s not energized. She’s anxious about the party.

“Is it turning into a party of people who don’t actually do anything and just tweet about doing stuff?” she wondered.

Murphy does think the Democratic party brand is solid. After all, she pointed out, Clinton won the popular vote. But Murphy said the party needs new leaders who will pay more attention to millennials.

“We told you eight years ago we weren’t super into Hillary,” she said. “And you didn’t listen.”

Adam Hanft, a brand strategist, helps companies market their products. Like him or not, Republicans have a strong brand in Donald Trump. Hanft said the Democrats needs a personality who can sell their brand.

“It’s a personality-driven era,” he explained. “We went from Clinton to Obama. And now we need a third, 3.0, modern Democrat who is not John Kerry and is not Al Gore.”

Hanft doesn’t recommend big changes in the Democrat’s economic policies. But he said Democrats need to repackage them to be more appealing to, yes, millennials, but also blue collar workers.

That’s what Ryan is arguing he could do, if he were elected as the House Democratic leader. Ryan represents Youngstown, Ohio, part of the Rust Belt. He would be a new face at the top, helping define the Democrats’ brand.

“Well, so much of a party brand is dependent upon party leadership,” said David Caputo, a political science professor at Pace University.

Some House Democrats think that, with Republican control of the House, Senate and White House, they’re better off with the experienced hand of Nancy Pelosi. But as for the future? Caputo said Democrats need to groom new, younger leaders.

“So you start to think, ‘Who are the logical candidates for president with the Democrats in 2020?'” he said. “And you’re left with not a lot of names.”

Caputo said we don’t really know if the Democratic brand needs a major overhaul. We won’t know that for a few years, when we find out if Trump’s victory signaled a national sea change or was just based on the strength of his personality. If it was a major shift, both parties will have to re-evaluate their policies on trade, jobs and our place in the world. And, yes, overhaul their brands. 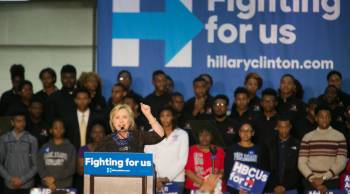 Clinton urged to spend money on getting out the black vote, to help Democrats in down-ballot races