KAI RYSSDAL: Madonna adopted a 13-month old boy from Malawi last month. You might have read about that in the supermarket checkout line. It was pretty controversial at the time. And it’s back in the news today. The high court of that South African nation heard arguments today that Madonna broke the rules when she took custody of the child before the adoption was finalized. There’ll be a ruling next week on whether the case should go forward.

But Madonna’s not the only celebrity who’s been creating a stir in Africa lately. The continent has become a mecca for the famous. Which has some wondering whether all the publicity is better for the impoverished countries or for the stars. Suzanne Marmion reports from Malawi.

SUZANNE MARMION: Many people have a hard time finding Malawi on a map. But somehow, Ewan McGregor, President Clinton and Mia Kirshner have all found their way here in recent months.

The town of Namitete in Malawi has come into vogue thanks to Madonna. These singers are part of an HIV support group in Namitete that meets at Consol Homes orphanage. HIV is largely responsible for Malawi’s stunning number of orphans. There are more than a million. One in twelve of all Malawians is an orphaned child.

Dasty Mayaya with the HIV support group says this orphanage will be lucky to receive Madonna’s help.

DASTY MAYAYA:“She is going to construct a center so that that center is going to assist about 1,000 children.”

Madonna is funding a Kabbalah center of spirituality for kids at the orphanage, based on the mystical Jewish faith she follows. Children would receive food at the center and learn Kabbalah-based values.

It’s tough to find anybody in Malawi who knows what Kabbalah is. For that matter, Dasty Mayaya says most people have never heard of Madonna either. But he can remember a song that Madonna once sang.

MARMION: Do you know what that song is about?

Masautso Siliya isn’t too familiar with the Material Girl either.

SILIYA:“Yes, I heard that she a musician?”

He volunteers at the orphanage, but the 17-year-old is an orphan himself. He gets by on donations, but they’re not always enough. For Siliya, that can mean choosing between paying school fees and eating.

SILIYA:“When coming I may not find food at home, I may go back to school with hunger.”

Madonna has promised to help raise at least $3 million to help Malawian orphans like Siliya. She is also spending about $1 million on a documentary she stars in. Everywhere Madonna went during a recent visit to Malawi, her private filmmaker followed.

MICHAEL WOLFF:“When a celebrity is in the public eye it is a highly thought out, highly conscious act. This is what they do for a living.”

Vanity Fair columnist Michael Wolff says it’s no accident that Madonna herself became the main focus of attention in Malawi, especially when she circumvented the country’s strict residency requirements to adopt a Malawian baby. Wolff says the singer has a history of courting controversy, from the publication of her “Sex” book to performing on a crucifix not far from the Vatican.

WOLFF:“Fame is ever-climbing or ever-diminishing. It’s like a shark, it can’t be still.”

WOLFF: So in every way every celebrity is always looking for ways to reinvent his brand. Is this such a case? Clearly. It’s obvious in that this is suddenly a trend in which everyone is participating in. I mean it’s not just happenstance that suddenly every celebrity is going to Africa.”

Not all the attention can be good for Africa, either. In Malawi’s case, local officials have struggled to put down fears that rich white people could take babies away from poor African parents. Also, Madonna’s controversy has distracted attention away from the real problems of the more than one million orphans remaining in the country, and the disease and poverty that have created them.

Inside this mud hut in Namitete, Regina Chapotera says she would be willing to give up her little girl to Madonna.

She said that her husband has died and it’s now difficult to find enough food for her two children and two other orphans she cares for. Chapotera can’t afford soap, and pointed to the mud hut with the leaky grass roof where she lives. She explained, “Life here is unbearable.” 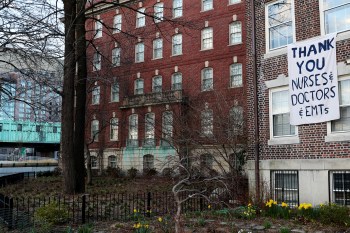