KAI RYSSDAL: The United States Constitution sets noon on the 3rd of January as the opening of each new Congress. That means the balance of power that held on Monday still holds on Capitol Hill. The 109th Congress has yet to pass 9 of 12 budget bills that’ll fund the government until next October 1st. So the lame ducks will be back in Washington next Monday to tackle some thorny spending issues they couldn’t resolve earlier. And our Washington Bureau Chief John Dimsdale reports the election results won’t make those decisions any easier.

JOHN DIMSDALE: Most of the government is running on a temporary, stopgap spending measure that expires a week from tomorrow. Congress is likely to extend the deadline for a few weeks while they engage in a complicated dance in which each party tries to maximize its existing or future majority control.

Maya MacGuineas, the president of the Committee for a Responsible Federal Budget, sees trouble ahead.

MAYA MACGUINEAS: The political reality, which is an unfortunate one, means one party is going to say why should we have to do the hard work of governing. Let’s leave it to the other party. And so there may be a lot of delay, a lot of gimmickry. What we don’t expect to see is a responsible and expedient process of passing the remaining appropriation bills.

If that weren’t tough enough, President Bush has a more ambitious agenda for the next few weeks — including extending tax cuts, opening up some offshore oil drilling, and approving John Bolton’s nomination to be U.N. ambassador.

Democrats have raised various objections to all three, and the White House is about to find out just how challenging lame-duck status can be. 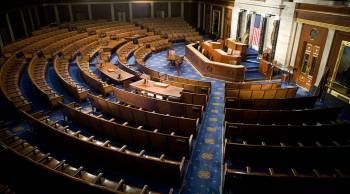 Congress in session – and not so lame?