Which way for the Fed?

Which way for the Fed?

SCOTT JAGOW: We got a pile of new economic numbers this week. And to be honest, we’re not sure which way is up. Some things point to a slowdown in the economy. But inflation is still a big concern. And that means the Federal Reserve is gonna have a tough decision later this month on interest rates. More now from Sarah Gardner.

SARAH GARDNER: The Fed’s “Beige Book” survey hints at slower growth and consumer spending. That’s a decent argument for leaving interest rates alone or even lowering them. But the Labor Department reports labor costs rising at their fastest pace in 16 years. That raises questions about possible inflation and the need to raise rates. Hugh Johnson is chairman of Johnson Illington Advisors:

HUGH JOHNSON:“I think that the Fed’s going to pay more attention to their own work, the Beige Book.”

DAVID JONES:“So far at least it looks like manufacturers are having trouble passing on higher energy and labor costs into higher prices partly because of global competition.” 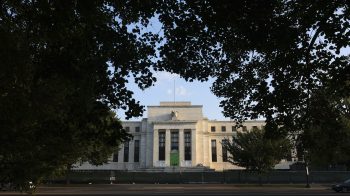