KAI RYSSDAL: Here’s a big fat heads-up for anybody out there holding federal student loans: There may be money lying right there on the table for you to take, but you have less than a week to grab it. Friday, June 30 is the last day to lock in low rates on college loans. They go up July 1. Seems like a no-brainer for many students, but it is not necessarily the right choice for everyone. Marketplace’s Steve Tripoli tells us who should be scrambling and what to watch out for if the scramble’s on for your money.

STEVE TRIPOLI: Oh, to be as on the ball financially as 26-year-old Ashley Barnett.

ASHLEY BARNETT: “Sure. Right under my contacts I have it listed as ‘Servicer.’ And I just click there and then have her number and the extension. I just dial it automatically every month.”

The monthly call-ins are to check that Barnett’s payment has arrived. She’s also checking to see that it’s on time. She’ll get a cut in her interest rates for timely payments, and she’s not letting that perk get away.

Barnett just finished grad school at Boston University. You won’t be surprised to learn that she’s already consolidated her $30,000 in student loans.

The refinancing lowered Barnett’s payments but extended the number of years she’ll be paying. She knows that’s a tradeoff.

BARNETT: “Obviously I’ll pay more in interest, but it gives me that flexibility as a recent graduate who doesn’t necessarily have all of that money at once, up front.”

Here’s the deal if you haven’t consolidated yet: Starting July 1, the rates on most adjustable-rate student loans are going up about 2 percent. Through June 30 you can lock in a low fixed rate on your existing loans.

One caveat: If you’ve already consolidated once, you can’t do it again.

Even though school’s out, over at Boston College earlier this week student loan manager Kathy Rosa said lots of folks are still chasing this opportunity.

KATHY ROSA: “There’s profound interest in consolidation. I am booked solid literally tomorrow every hour of the day with appointments of students coming in to see me.”

Rosa says there’s a downside to all this attention. It is partly the product of an intense marketing campaign by lenders.

Ashley Barnett says the barrage of offers made her consolidation chore harder.

BARNETT: “My mailbox was bombarded with different lenders, I guess? And you really didn’t know who to choose or where to go. It took a lot of research. So it was a headache, because it was so many different people coming at you from different angles.”

One problem with this marketing is that some of the lenders aren’t part of the federal program that strictly limits interest rates and loan terms.
The best way to find the good guys is to work directly with the government. Or ask your private lender for the six-digit “federal lender code” that shows it’s playing by government rules.

Consolidating may not be for everyone. The biggest payoff comes for folks with truckloads of debt after grad school. Experts are more divided on what’s best for those who owe less than about $20,000.

What seems clear is that the optimal combination of interest rate, payment size and loan length is different for different people.

The College Board’s Cindy Bailey says too many students focus on just one of those factors in ways that can be costly.

CINDY BAILEY: “It’s very tempting to want to lower your payments. And students typically think short term. They don’t think that they’re gonna be paying a whole lot more in interest over a 20-year period than over a 10-year period. So it takes a pretty practical student who’s gonna figure that out that in the long run, it doesn’t pay off.”

One last thing to shop for is incentives.

Lenders like Ashley Barnett’s will cut your interest rate once you pay on time for a while. Others grant up-front rate cuts if you’ll let them take direct payments from your bank account.

The Department of Education’s Direct Loan program has a benefit called “income contingency.” Scott Prince of the Massachusetts Educational Financing Authority says it lets your income shape your payment size and loan length.

SCOTT PRINCE: “So if you start out from school, especially if you’re not making a lot of money, you can consolidate your loan into one of these loans and have a low monthly payment. And as your income grows so will your loan payments accordingly.”

So shop around, be sure to find a federally-approved lender, and remember one thing that especially applies to recent graduates: Be sure to tell your lender if you’re moving, because missing a payment can cost you some of those money-saving incentives.

Ashley Barnett moved to Atlanta on Thursday. You can be sure she’ll be hitting speed dial number 41 with that news if she hasn’t already. 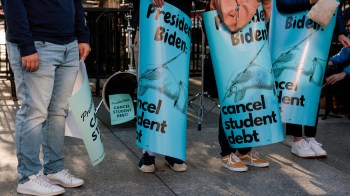