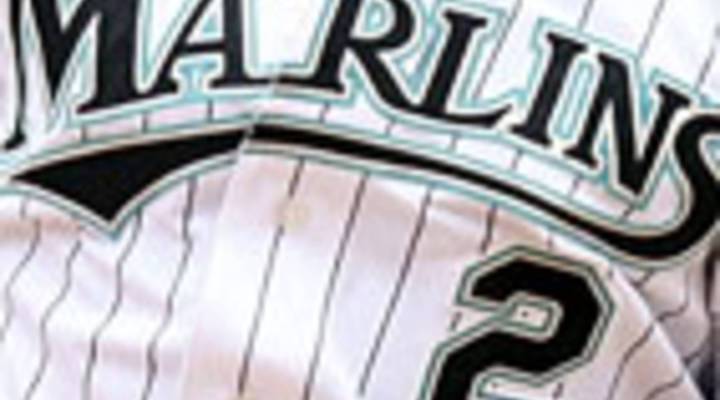 SCOTT JAGOW: Baseball slugger Barry Bonds has only Hank Aaron to catch now. Yesterday, Bonds hit his 715th home run, passing Babe Ruth on the all-time list. Bonds needs 41 more homers to top Aaron. Tonight, his team, the San Francisco Giants, takes on the Florida Marlins. The Marlins terrible this season. Now, I’m sure the players are doing their best and trying to win. But for the Marlins management, losing is apparently a business strategy. Marketplace’s Ethan Lindsey explains.

ETHAN LINDSEY: Sports fans have a saying: every season, one team finishes with a win — and every other team goes home a loser.

In baseball, the Florida Marlins have managed to finish with a win twice in the past 10 years. Most fans would give anything to win two World Series.

But just a couple of years removed from their 2003 win, the Marlins ownership has assembled a roster that may be remembered as the worst baseball team ever.

It’s all according to plan, says Marlins’ president David Samson.

DAVID SAMSON: We went all the way. We traded all the players in an effort not to be mediocre. It’s possible that we’re not going to win as many games this year as we would like. But we think we are set up to win again in short order.

After last season, the Marlins traded away all of their expensive players except for a few prospects they already had signed to cheap contracts.

Why the fire sale? For the owners, a cheaper team is easier to sell or move to another city.

DEREK JACQUES: It’s basically the carrot and the stick. They’re saying we will field a competitive ball club if you go and build us a new park. If you don’t build us a ballpark, we’re not going to bother.

There’s an ironic resonance here. In the 80’s movie Major League, the owner of the Cleveland Indians put together a cheap, losing team so she could move it to Miami.

Baseball fans know that despite the millions of dollars the players make, the owners themselves have to watch every penny to make payroll

Most teams sign just enough star players to compete every year and then hope a winning streak comes along.

But the Marlins seem to have created a way to game that system. Call it Poker-ball. In the years where the Marlins have a chance to win the big money, they go all in — and jack up the payroll. But when they have a weak hand, they fold. They sell off all the pricey players.

ROXY BERNSTEIN: My job doesn’t change, but as far as the fans and the perception go it might be a little harder to gain their interest because they don’t know these guys.

And he says, the constant parade of unfamiliar players in Miami’s rainy baseball season has meant the Marlins regularly sport the lowest attendance in the National League.

Fewer fans through the turnstile mean even less money in the front office. Which, in turn, pushes the owners to look for pastures greener than Miami.