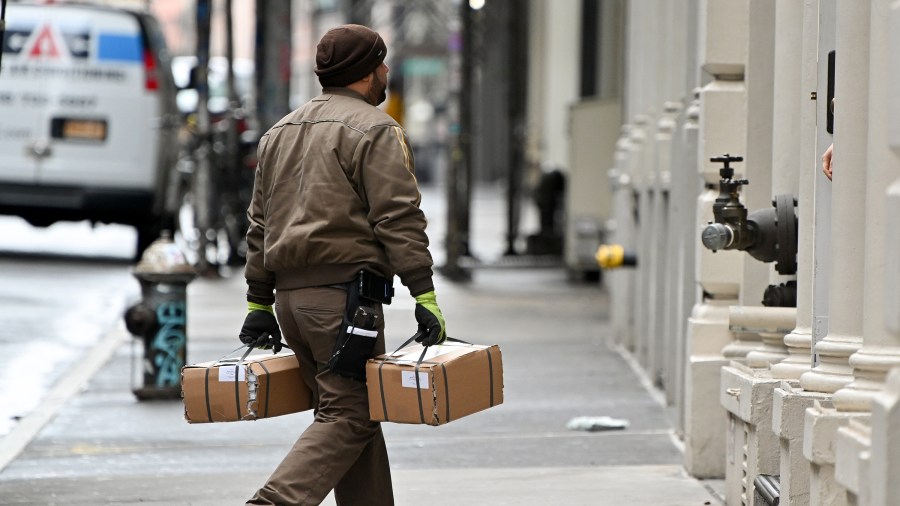 About 800 million more packages are expected to be delivered this holiday season. Above, a UPS worker delivers packages in the Tribeca neighborhood of Manhattan. Dia Dipasupil/Getty Images

It takes a lot to increase capacity in shipments — warehouses, fulfillment centers, trucks and even planes.
Listen Now

About 800 million more packages are expected to be delivered this holiday season. Above, a UPS worker delivers packages in the Tribeca neighborhood of Manhattan. Dia Dipasupil/Getty Images
It takes a lot to increase capacity in shipments — warehouses, fulfillment centers, trucks and even planes.
get the podcast
get the podcast

Pandemic plus holidays? That equals a huge increase in online shopping and about 800 million more packages to be delivered than last year. But shipping companies and merchants that aren’t Amazon aren’t handling it all that well. For example, last week, UPS limited the number of packages it would pick up from certain merchants like the Gap and Macy’s. In some ways, this seems like something folks should have prepared for, but it’s a big deal for shippers to increase capacity. It takes warehouses, fulfillment centers, trucks, planes.

And unlike Amazon, shipping companies can’t spin up a quick army of independent contractors. I spoke with Matthias Winkenbach, director of the MIT Megacity Logistics Lab. The following is an edited transcript of our conversation.

Matthias Winkenbach: One very important point here is, obviously, workforce flexibility. If you look at the big parcel carriers, most of them are, for good reasons, relying on a very, very stable workforce, usually, also, quite unionized workforce. If they want to maintain that model, they’re obviously less flexible in scaling up or scaling down the workforce on demand.

Molly Wood: Is there also a kind of mindset difference here? It also seems like Amazon is better at anticipating peak load.

Winkenbach: So of course, Amazon, they obviously have an edge over the more traditional logistics companies in using data and analytics to, let’s say, predict volumes, even though the DHLs, UPSes and FedExes of this world, they haven’t slept over the last couple of decades. But there’s also a difference in mindset, if you look at the traditional customer base of these companies. So while e-commerce platforms like Amazon are, by definition, consumer focused, many of the parcel companies, parcel carriers and their traditional, or let’s say, most loyal customer base is not the final consumer, but are corporate clients. That’s also one explanation for why they’re probably a little bit more reluctant to just move fast and break things.

Wood: Interesting. So that’s why, for example, UPS doesn’t just get rid of the Teamsters union, fire all the drivers and use Amazon’s model, it’s because UPS is also a brand?

Winkenbach: Exactly. UPS is a brand. UPS is a source of trust. I’ve actually worked with UPS in the past, we’ve been on delivery routes, and it’s amazing to see how much the driver is really the face of the company. The driver is usually kind of a source of trust for many customers. We’ve been walking into companies, like corporate clients, [and] without even showing our badge, people just knew, “OK, these guys are from UPS, so it’s fine.” That would never happen to you if you were a non-branded Amazon flex delivery person, for instance. So they have a lot of, let’s say, brand equity to lose if they don’t do it right, or if there are trust issues between the driver, which is really the customer-facing part of the company, and the customers.

Wood: But, at the same time, we’re going into a holiday season and a kind of pandemic that Amazon is winning. This company has spun up an incredible logistics machine in a very short period of time. And I wonder what you think that means for businesses that need to compete, whether those businesses are UPS or Macy’s.

Winkenbach: I mean, what some of the carriers have already started to do is they have started to work with their most important shippers, actually, on smoothing out these extreme demand peaks. And that’s probably a big advantage that the UPSes and FedExes of this world have. They have these long-standing relationships with their important retail clients. What we’re going to see this year is probably a very strong collaboration between some of the major shippers and some of the major carriers to try and balance the load that we are seeing due to the holiday season and the pandemic.

Wood: It’s interesting, because in some ways, it sounds like a little bit of replicating what Amazon does, in that it can control the supply and the distribution. And you’re saying these big shippers are using their relationships with companies to try to control the supply.

Winkenbach: Yeah, as much as they can. You have to keep in mind, though, that that’s hard. It’s harder for [companies] like UPS or FedEx to control the supply than for Amazon, because, let’s say, if Amazon gets an order from you, and they realized that the fulfillment center that this would usually come from is maybe over capacity already, then they might just send it from a fulfillment center on the other side of the country. And they might pay a lot of money to get this order to you in time, but they have that flexibility to just basically change the source of the shipment for you as the customer. While UPS, FedEx, all these parcel carriers, they’re pretty much dependent on where volumes are being fed into the network. And that’s where they have to actively work with the shippers to make sure that all the volumes that are being fed into the network also meet the required capacity.

Wood: So if I break it all down, what you’re really saying is shop early?

Winkenbach: Yes. And that’s, by the way, something that is true, not just during the pandemic and not just during the holiday season. Maybe that’s a good exercise for all of us, to kind of challenge our shopping behavior. I mean, we’ve been doing research on this for quite a few years now, and this trend towards more and more on demand consumerism — I mean, we’re all susceptible to it, because it’s super convenient to just order something and get it the same day or the next day. But we really need to question whether that’s necessary for every single thing that we buy. And I think especially this time of the year and under these circumstances, maybe also the consumers need to reconsider whether everything they order on Amazon or elsewhere needs to be delivered as fast as possible, or whether there’s certain things to prioritize and other things to deprioritize.

The New York Times has a long piece about the 3 billion packages that are expected to be in the system this holiday season. It also talks about this pressure that shippers like FedEx and UPS are applying to retailers. The pressure those retailers are feeling to get anything sold and shipped and the pressure that everyone is feeling from Amazon, which, as this dude named Brian Shields recently noted on Twitter, just quietly created an unbelievably huge and efficient shipping and logistics system over the course of the last six months, so fast and so smoothly that it’s kind of insane to contemplate.

Speaking of delivery, food delivery service DoorDash had what can be safely called a hugely successful IPO Wednesday; shares were up over 85%. And Airbnb, of course, debuts Thursday. DoorDash did warn investors that the pandemic is a huge boost to its delivery business, but that things might settle down again once it’s over and restaurants finally open back up. In some ways, Airbnb is making the opposite argument, that the pandemic took its current business to almost zero, but that when people are ready and able to travel again, they’re going to want nice, private houses instead of crowded hotels.

Oh, and the Facebook thing. Yes, that also happened Wednesday. Arguably the biggest antitrust case since Microsoft back in the 1990s. Now, to be sure, this case will drag on for years, and it’s not that likely in the long run that Facebook will be ordered to split off Instagram and WhatsApp, although I guess you never know. But what will be interesting is what we will learn about Facebook and its business practices during the course of this thing, what upstart competition the company won’t be able to buy while all eyes are on it, and whether the case could ultimately take down CEO Mark Zuckerberg if he becomes the face of the business practices that keep getting Facebook sued. A whole new chapter in tech history started this week. 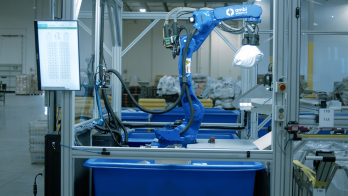