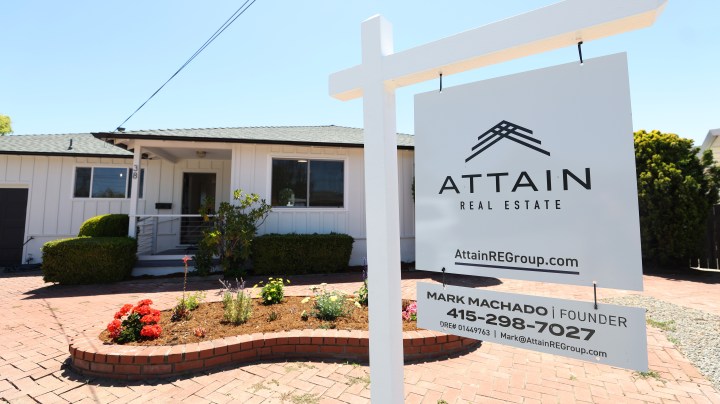 COPY
Sellers are "not only getting realistic about their asking price, but they're also having to get realistic about doing repairs," says LaTisha Grant of the TAS Realty Group in Houston. Justin Sullivan/Getty Images

Sellers are "not only getting realistic about their asking price, but they're also having to get realistic about doing repairs," says LaTisha Grant of the TAS Realty Group in Houston. Justin Sullivan/Getty Images
Listen Now

For months, a mix of high inflation, high interest rates and low supply has meant that houses put up for sale have been snatched up for explosively high prices.

According to the Case-Shiller national home price index, prices are 43% higher than they were at the start of 2020, and, coincidentally, the number of houses on the market is 43% lower than it was in 2019.

Recently, though, the market is showing signs of cooling. Dozens of major housing markets across the country are seeing houses stay on the market for longer and prices decline. That includes Houston, where prices are down 4.5% from their highest point earlier this year.

LaTisha Grant, executive managing broker at TAS Realty Group in Houston, joined Marketplace’s Amy Scott to talk about what she’s hearing from buyers and sellers. An edited transcript of their conversation is below.

Amy Scott: Give me an example of how long a house might have been on the market now versus, say, a year ago.

Scott: Oh my gosh. Yeah, that is quite a turnaround. And in some ways, that seems like good news for buyers, right? Because, you know, people have been just shut out of the market in these bidding wars. Now that houses are staying on a little longer, are some of them starting to see some hope?

Grant: For those that are available in the market, I will say yes — this is a great time for them. But so many were so discouraged that they entered into a longer-term lease, not because they find comfort in renting. But my conversation in response to them is, with inflation, up goes rent. So even though you can afford the rent today, when it’s time to renew your lease, that rent is going to increase and most likely it is going to be unaffordable as well.

Scott: And on the other hand, of course, the reason homes are staying longer on the market is these higher mortgage rates. How is that affecting affordability for especially first-time buyers?

Grant: So for us here in Houston, “affordable” no longer has the same look as it once had. So it is a bit discouraging for many of our first-time entry-level buyers. But whenever we talk about first-time homebuyers, it’s a stigma that they are low- to moderate-income buyers. But we have a lot of our millennials that are entering the homeownership market at above-average list price. So they’re not affected. However, our entry, our first-time homebuyers low-to-moderates, they are greatly affected.

Scott: Well, you and I met when I was in Houston reporting on the homeownership gap between Black and white households, and there was a big campaign to increase Black homeownership that you’ve been part of. I’m wondering what the long-term impact might be of this affordability challenge in reaching the goal of closing that gap?

Grant: Yeah, so that is greatly impacting the goal of increasing homeownership for African American and minority buyers. What it has done is gain the awareness of many other individuals. So now there are more people that are on the campaign to increase those numbers. However, with the interest rates and price points continuously increasing and African American incomes aren’t representing those increases, we are kind of at a standstill as far as our rates, our purchasing power, is concerned.

Scott: How about sellers? You know, we got used to a seller’s market, and they’ve been raising prices and, you know, cashing in a lot of equity. Are people starting to have to get a little more realistic and maybe lower their asking prices?

Grant: Yeah, they’re kind of crying. They’re not happy about it. But they’re absolutely not only getting realistic about their asking price, but they’re also having to get realistic about doing repairs. You know, during that time where people were making offers, the high buyers, you know, the sellers didn’t have to do any repairs because it was so competitive. If you asked them for anything, you were declined.

Grant: Exactly. So now they’re like, “Well, do I have to do that?” and I’m like, “If you want to keep the offer, you may want to go ahead and make those repairs.”