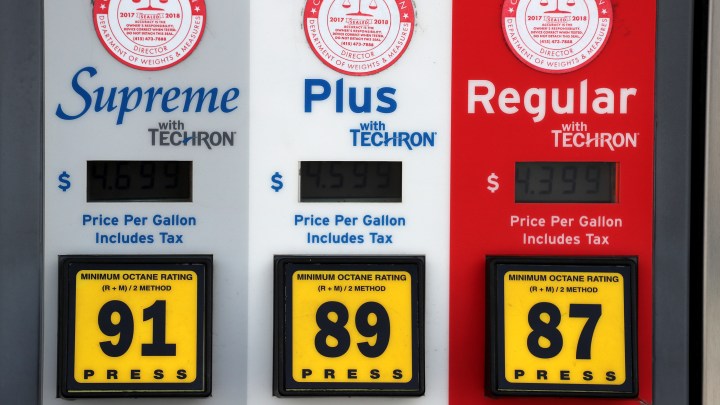 COPY
Gas prices at the pump vary from state to state. Why is that? Justin Sullivan/Getty Images

Gas prices at the pump vary from state to state. Why is that? Justin Sullivan/Getty Images
Listen Now

The national average for a gallon of unleaded is just about four bucks – $3.99 according to AAA, to be exact. But the range of what folks are paying varies widely depending on where you are. Gas is $5.39 in Hawaii and $3.49 in Texas. How come?

It’s not exactly the same as the three most important things about real estate, but it turns out location matters a lot when it comes to how much you’re paying to fill up your gasoline tank.

“The two big things right now that are driving the differences in price that you see regionally, have a lot to do with differences in state taxes, and also the transportation component,” said Hugh Daigle, an associate professor at the University of Texas who teaches petroleum and geosystems engineering.

The transportation component Daigle is talking about is the cost involved in getting the gas from where it’s produced to where you buy it.

Now, that’s the supply side of things. Akshay Rao at the University of Minnesota said there’s a demand element here, too.

“People buy gasoline, not because they like gasoline, right? Nobody goes window shopping for gasoline, it’s a means to an end, it provides the benefit. And the benefit is getting from point A to point B in a particular fashion,” Rao said.

Rao said it’s not just about getting there, it’s getting there in the way that fits your lifestyle- whether that’s a family taking kids to soccer practice in a minivan, or a contractor delivering lumber in their pickup, neither are necessarily the most fuel efficient vehicles out there.