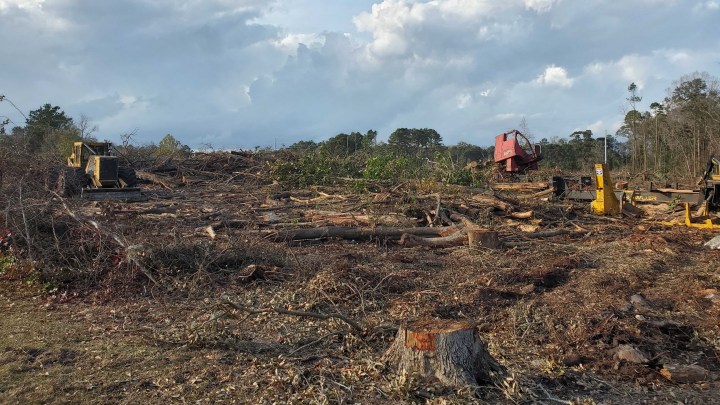 COPY
On a formerly forested lot, trees have been cut down to make way for development. Emily Jones/WABE
A Warmer World

On a formerly forested lot, trees have been cut down to make way for development. Emily Jones/WABE
Listen Now

The warehouse industry is exploding as ports scramble to get ahead of supply chain problems. Building a new warehouse can keep goods moving and create well-paid jobs — but it can also mean cutting down a lot of trees, which can have a big impact on local communities and climate.

That’s happening in communities near the port of Savannah — the fourth busiest in the country, moving more and more cargo all the time. And all that stuff needs somewhere to go.

“You’ve got to have an opportunity or a spot to take it off the container, repackage it, send it to all the other locations that you know where the ultimate product is supposed to end up,” said Trip Tollison, president and CEO of the Savannah Economic Development Authority.

Most of that land used to be forest, according to Zoe Rinker of the Savannah Tree Foundation.

“This is an issue of quality of life and public health and really just making sure that everybody has the same access to green space,” she said.

Trees aren’t just pretty to look at; they’re an essential buffer against the impacts of climate change, creating cooling shade, soaking up rainwater and absorbing carbon dioxide from the air.

Rinker said many communities have laws to protect trees, but they’re out of date. “Our tree ordinance wasn’t necessarily made for this warehousing industry in mind,” she said.

Some local governments are working to update their rules and communities are also advocating for themselves.

“We’ve always had a history of being proactive,” said Tyrone Ware, president of the neighborhood association for a Savannah area that’s surrounded by industry.

His group has successfully gotten companies to plant trees. The key, he said, was approaching the companies cooperatively instead of fighting them.

“It’s a matter of them being conscientious and understanding that the community has been here, the community wants to be here and that they want to work with us and want to be partners and neighbors with us,” Ware said.

Other places can learn from this approach, he said.

But in the meantime, as communities scramble to update laws and neighborhoods try to protect themselves, warehouse building continues to boom — and take down lots of trees.