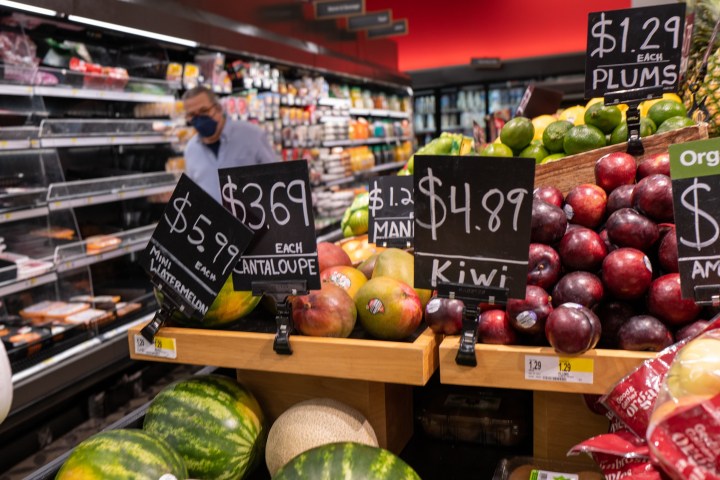 The Federal Reserve hiked interest rates Wednesday for the fourth time this year in its effort to influence prices for goods and services by indirect means. Spencer Platt/Getty Images
I've Always Wondered ...

The Federal Reserve hiked interest rates Wednesday for the fourth time this year in its effort to influence prices for goods and services by indirect means. Spencer Platt/Getty Images

Could a temporary wage and price freeze curb inflation and mitigate the possibility of a recession?

Inflation continues to set multidecade records, with consumer prices rising at an annual rate of 9.1% in June, according to the Labor Department.

In response to increasing prices, the Federal Reserve has been raising interest rates this year, including a second consecutive 0.75% hike Wednesday. Some experts worry that a recession could result from the Fed’s attempts to slow down the economy.

A recent survey from the McCourtney Institute for Democracy, in collaboration with APM Research Lab, asked Americans how the country should tackle inflation. There wasn’t much consensus, but the top responses were to reduce government spending and impose temporary price freezes.

The U.S. has actually used wage-and-price freezes as a tactic to curb inflation at different points in its history, including World War II and during the Richard Nixon administration in the early 1970s. That was the last time the country enacted widespread price controls.

But a majority of economists disagree that ’70s-style price controls could reduce inflation over the next year, according to a survey from the University of Chicago Booth School of Business that came out in January.

While a wage-and-price freeze could temporarily stifle inflation, it’ll just exacerbate the issue once we lift those controls, according to Hernan Moscoso Boedo, an associate professor of economics at the University of Cincinnati.

You can think of it like a pressure cooker. “If you try to control the pressure by holding the lid, well, eventually it’s going to explode if you don’t have the valve that releases the pressure,” Moscoso Boedo said.

Let’s say the government controls prices and the Fed decides to keep interest rates low. That basically means the Fed is printing money, Moscoso Boedo said. (Conversely, when it raises interest rates, it’s basically trying to reduce the supply of money in the economy.)

The money has to go somewhere, and the pressure will build up, Moscoso Boedo said. That pent-up demand will influence prices, making them soar once the controls are gone.

Early in the COVID-19 pandemic, when millions of Americans had lost their jobs, the government sent out billions of dollars in relief checks. Moscoso Boedo pointed out much of that money went unspent because of business shutdowns, creating pent-up demand — which stoked inflation.

Moscoso Boedo added that price controls produce shortages. For example, if a supplier thinks his or her product is worth $10, and you force the price to stay at $9, that supplier may hold onto the inventory of that product until the price controls are over.

On top of that, controls can give rise to illegal markets. He argued that if the price of a gallon of milk is supposed to stay at $2 even though consumers would pay $3, you’ll see less milk supplied at the store. Some people would use that opportunity to sell a gallon of milk under the table for $3.

According to the Heinz History Center, this happened during World War II. The price controls in effect then helped push independent sellers to secretly buy and slaughter animals, then sell the meat for higher prices.

It would also be difficult to figure out how to set prices for millions of products in the large and complicated U.S. economy, said Peter Orazem, an economics professor at Iowa State University.

“Prices may not be the same everywhere. Some places may have too much of a product, and other places have too little. You want the product to move from places where you have surplus to places that have shortages, and the price signals create that incentive,” Orazem said.

“If you don’t have a price system that’s responding to those relative supply and demand shocks, you’re going to end up with an inefficient allocation of resources across the economy.”

Orazem said that if certain products are in short supply, you would ideally want prices to rise to give firms an incentive to provide more of those goods.

“The general consensus is that the damage caused by wage-and-price controls are much larger than any benefits,” he said.

And if there were a wage freeze, it could discourage people from accepting work because they’re being offered less than they would be paid otherwise, Moscoso Boedo said.

While many economists find fault with the idea of a nationwide freeze on prices and wages, some — like Isabella Weber of the University of Massachusetts, Amherst — favor strategic price controls on select goods.

Weber, making the case for this approach in an opinion piece for The Guardian, wrote that following World War II, price controls could have stayed in place while the U.S. transitioned to a “postwar economy” as opposed to lifting them in “one big bang.” Some economists had advocated for this at the time, Weber pointed out. They argued that the price controls should be lifted once the “supply and demand of any important commodity” was in balance.

And price controls can be beneficial if they’re selectively applied to, for example, a monopoly, wrote Christopher Neely, vice president at the Federal Reserve Bank of St. Louis. Neely said that because monopolists generally sell less of a good and at a higher price than competitive firms, price controls could force them to sell more of that product at a lower price.

The minimum wage is also considered a form of price control, with wages being the price of labor, and it’s in force throughout the country. But in this case, the government is setting a floor for what people should be paid, instead of a ceiling — or cap — on their earnings.

Those who advocate for a higher minimum wage, or price floor, say that bumping it up could bring millions out of poverty.