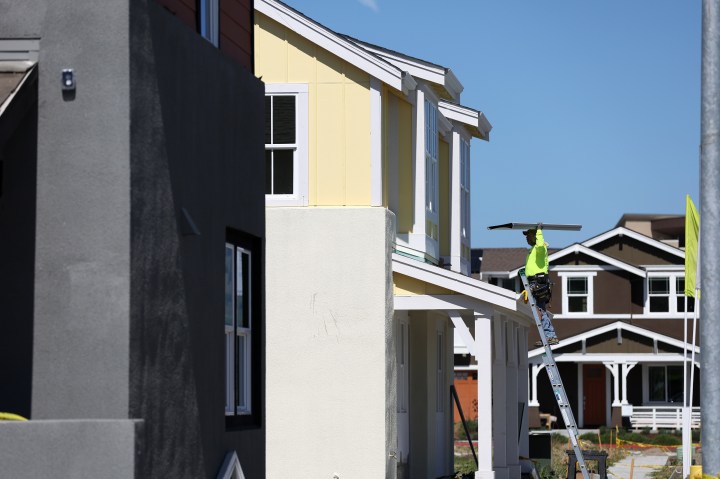 A construction worker carries materials as he works on a home under construction at a housing development on March 23, 2022 in Petaluma, California. Justin Sullivan/Getty Images
I've Always Wondered ...

A construction worker carries materials as he works on a home under construction at a housing development on March 23, 2022 in Petaluma, California. Justin Sullivan/Getty Images

With a possible recession, do you think businesses will be more reluctant to fire employees after having such trouble finding people to fill jobs —  especially in industries with specialized skills like airlines, manufacturing, or construction?

U.S. employers added a robust 372,000 jobs last month, while the unemployment rate stayed at 3.6%, according to the Labor Department.

Despite these gains, the possibility of recession looms. Some predictions are more pessimistic than others, and some analysts have suggested we’re already in a recession (the official declaration is done by the National Bureau of Economic Research, which defines it as “a significant decline in economic activity” that lasts more than a few months).

While recessions often lead to layoffs, companies have complained of trouble finding workers for more than a year. It’s a case of two economic forces colliding, as Luke observes. It’s tough to find historical reference points for this moment.

“We don’t have an exact historical analogue,” said Glassdoor’s senior economist Daniel Zhao. “We haven’t had a period of extreme labor shortages followed by a recession.”

Even so, Zhao said, “the base case is that employers will have to lay off workers” in an economic downturn.

“Because fundamentally, labor is one of the largest costs for most employers. So if an employer has to choose between laying off workers or remaining solvent, they’re going to choose laying off workers every time,” he said, adding that layoffs could be “more muted” than in another recession of a similar scale.

“The optimistic case is that, if we have a mild downturn, employers err on the side of keeping workers or bringing workers back more quickly because they don’t want to return to the 2021 labor market where they were experiencing labor shortages and the Great Resignation,” Zhao said.

Zhao pointed out that after the housing crash of 2008, homebuilders were reluctant to expand based on enduring memories of the downturn. This time around, the memory of staffing struggles could instead discourage employers from cutting back too much.

“No industry is 100% resilient to recessions. But certainly some industries and occupations bounce back quicker than others,” Zhao said.

When it comes to the airline industry,  Zhao noted that employment has yet to recover to levels reached before 9/11.

“I think that really makes it hard to guarantee that this is a growth industry. But it might at least suggest that there are some jobs within the industry that are more stable, especially because many, many workers at airlines are on union contracts. And that certainly has a very significant impact on job security,” Zhao said.

At the moment, the industry is rushing to hire staff as shortages of all types of staff members, including pilots and crew, abound. It’s become so dire that some airlines have to cancel flights because they can’t find enough pilots.

Over the past four decades, manufacturing employment has shrunk as the U.S. economy has shifted toward the service industry and manufacturing jobs have moved overseas.

“This is also a case where labor is a very significant cost to many manufacturers, and so this isn’t a case where important employers necessarily have a lot of flexibility to keep workers on staff if there isn’t work for them to do,” Zhao said.

He thinks industries that were hit hard by COVID-19 — like manufacturing, which faced supply chain disruptions — will try to avoid operating leanly.

“The just-in-time supply chain model has been the preferred way of handling logistics for many years now, but it was exposed during COVID. Because if there’s a huge disruption to them, it just makes it impossible to efficiently operate,” he said. “If you’re a business and you keep your staffing levels as lean as possible, you will save money — if things are consistent and predictable. Of course, they’re not.”

Zhao pointed out that as the pandemic persists, workers may require time off to quarantine or take care of sick family members.

“That means that these employers need to have some additional buffer in their staffing levels to actually account for that. So I do think that, hopefully, should help support employment levels in industries like manufacturing,” he said.

Job openings in the sector ramped up in 2021. There were about 800,000 open manufacturing jobs this May, according to Labor Department data.

Carolyn Lee, president of the Manufacturing Institute, said she can’t “forecast whether or not a recession is upon us,” but she’s hearing from companies that filling open jobs is a top priority for them.

The open positions in manufacturing span from hourly production and entry-level jobs in the field to jobs in sales and marketing; customer service; and financing, according to Lee.

Lee said that the Creators Wanted campaign — launched by the National Association of Manufacturers and the Manufacturing Institute to recruit new workers — aims to change the perception of manufacturing careers and show “our jobs really run the gamut.”

“What we’re hearing from companies is that they are committed to stepping up their efforts to educate and upskill their existing staff,” Lee said. “And they are working to tighten up their supply chains, because, of course, the supply chain has been a big issue for the last couple of years.”

Everything around us is a product of manufacturing, Lee emphasized, from the personal protective equipment used throughout the pandemic, to technology, to food.

“But we do know that as interest rates are rising, that’s slowing down the housing sector and is likely to slow down construction as a result,”  Zhao said.

Ken Simonson, chief economist at the Associated General Contractors of America, said he thinks there may be some parts of the construction industry that won’t fare as strongly as others.

Simonson said he thinks single-family homebuilding specifically will slow down “given the huge increases in construction costs, house prices and mortgage interest rates, which collectively mean fewer people can afford or qualify for mortgages to buy new houses.”

This could make it harder for workers to find home building or remodeling jobs, Simonson explained.

But, he noted, there were 466,000 openings in the construction industry in May — a 39% increase year-over-year and the highest number since 2000, the earliest data available. Meanwhile, there were 88,000 layoffs and discharges in May, which is one of the lowest figures on record.

This data suggests “the industry still sees plenty of reason to add workers and remains very reluctant to lay any off,” Simonson said.

He noted that he hasn’t heard of “any cutbacks in nonresidential building or infrastructure construction.”

Simonson also said a large amount of money from the Infrastructure Investment and Jobs Act, which will provide $550 billion in new spending, “has yet to turn into a significant number of project awards.” The bill’s money will go toward revamping or building roads, bridges, airports and public transit systems, among other projects.

“So I expect infrastructure contractors to boost hiring as that money makes its way to them,” he said, adding that manufacturing construction spending tripled between May 2021 and May of this year.