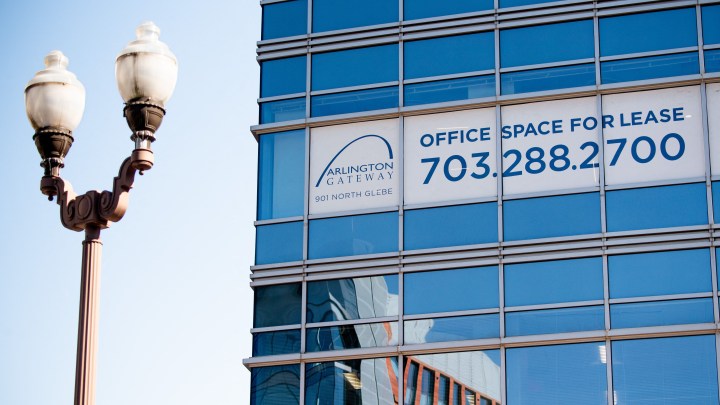 COPY
Occupancy periods in leasing agreements shortened during the pandemic, which could expand the amount of unused office space in a few years' time. Saul Loeb/AFP via Getty Images

Occupancy periods in leasing agreements shortened during the pandemic, which could expand the amount of unused office space in a few years' time. Saul Loeb/AFP via Getty Images
Listen Now

If you’re wondering how companies might react to a recession, look no further than 441 Ninth Ave. in lower Manhattan. That’s the headquarters of Peloton, a home workout company that — after falling on lean times — has reportedly put 100,000 square feet of office space up for sublease, according to Bisnow, which tracks commercial real estate.

This comes after Peloton laid off about 20% of its staff. Peloton had trouble before recession worries crept into the economic ether, but its experience may be a cautionary tale.

CEOs across the country are asking themselves, “What expenses can I cut, if I have to?” And in the era of remote and hybrid work, the answer is increasingly, “How about the office?”

Micah Remley is the CEO of Robin, a company that provides hybrid work consulting. He said he’s getting this question from anxious CEOs these days: If I give up on trying to get employees back to the office full time, how much money can I save?

“Typically, office space is your second-largest expense after employee costs,” he said.

If the pandemic hasn’t convinced executives to let go of the corner office for good, Remley said an economic downturn might do the trick. “So, a lot of people are coming to terms with that — and potentially as a cost savings measure going into a recession.”

Of course, companies can’t just downsize their space overnight. Many are stuck in long-term leases, sometimes for 10, 15 or 20 years.

But the pandemic changed that too, per Alex Cohen with the real estate brokerage Compass.

“The typical lease term went down significantly. The moves that were still made when COVID was still rampant generally were shorter term.”

Think three-year commitments as opposed to more than a decade. That means that in a few years, office buildings may be even more empty than they are now. The vacancy rate is already over 18%, according to Victor Calanog, who researches commercial real estate at Moody’s Analytics.