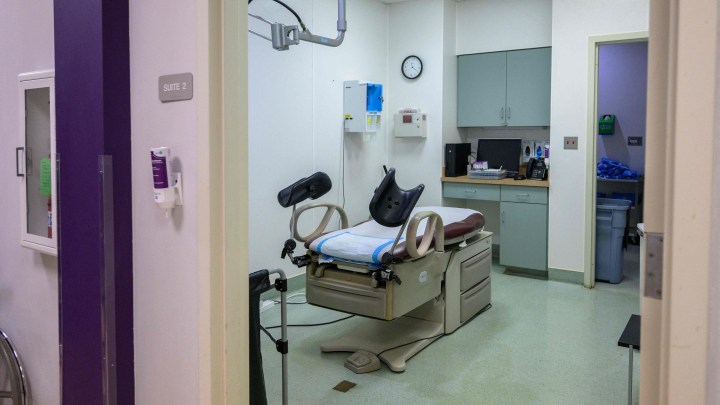 COPY
Abortion access is already limited on tribal lands by the Hyde Amendment. Above, an exam room in an Illinois abortion clinic on June 27. Angela Weiss/AFP via Getty Images

Abortion access is already limited on tribal lands by the Hyde Amendment. Above, an exam room in an Illinois abortion clinic on June 27. Angela Weiss/AFP via Getty Images
Listen Now

Last Friday, after the Supreme Court overturned Roe v. Wade, Rachael Lorenzo went to a rally at Tiguex Park in Albuquerque, handing out condoms and sustainable period products, and spreading the word about the nonprofit Indigenous Women Rising.

“Have you heard of us?” Lorenzo asked a rallygoer. “We’re one of the abortion funds in New Mexico, but we serve Native people all over the country.”

Lorenzo said near-bans in those states have created new barriers for Native people seeking abortion. But tribal lands were abortion-care deserts long before this wave of anti-abortion legislation.

“We see rhetoric on social media or in the news, like, ‘Roe v. Wade [being overturned] is the end, the sky is falling,’” Lorenzo said. “But the sky has been falling for Native people specifically. We’ve been living in the apocalypse without full bodily autonomy.”

Despite the unique barriers to abortion access in Indian Country, there’s been some buzz since the leak of the court’s draft opinion in May about reservations serving as legal havens for abortion care. Tribal nations are sovereign, with their own laws and court systems. So couldn’t an abortion clinic set up shop on tribal land to circumvent state-level restrictions?

But experts say anyone volunteering tribal nations to fill new gaps in abortion access is missing some crucial context.

“The primary provider of health care in Indian Country is the federal government,” said Aila Hoss, an attorney focused on tribal public health.

The government provides that care through direct service at Indian Health Service hospitals and clinics and by funding tribally run and nonprofit urban Indian health care centers to fulfill its trust and treaty obligations to tribal nations.

“But because that system is federally funded, it’s going to be covered by the Hyde Amendment,” Hoss said, referencing the measure that prohibits the use of federal dollars through programs like Medicare, Medicaid and the Indian Health Service for abortion care except under rare exceptions.

That’s why getting an abortion in Indian Country is already complicated, and why closing that gap isn’t as simple as a tribe opening an abortion clinic or offering abortion care at an existing one.

“To get around the Hyde Amendment, that means if a tribe wants to provide those services, they have to segregate their funds and provide nonfederal funding for those services,” Hoss said.

Some tribal governments have the legal and financial resources to do that, but most probably don’t. And so far, none have volunteered.

Yet experts are still fielding questions about the possibility of abortion clinics setting up shop on reservations.

“To say it’s a hot topic is a profound understatement,” said Stacy Leeds, a professor of Indian Law at Arizona State University and a citizen of the Cherokee Nation. “A lot of the calls that I’ve been receiving suggest that a non-Native person might go inside Indian Country to access [abortion care]. That’s simply not happening.”

Leeds said it was never clear that non-Native patients or doctors could circumvent state laws by receiving and performing abortions on tribal land. But this week, the Supreme Court appeared to close the door on that possibility by expanding states’ criminal jurisdiction over non-Natives in Indian Country.

Those legal and financial barriers aside, Leeds said this conversation — which has largely been led by non-Native journalists, activists and pundits — is tone deaf.

“It comes against the backdrop of a lack of full reproductive rights,” Leeds said, for Native people whose recent history includes traumas such as forced sterilization and forced removal of their children to government-run boarding schools and non-Native adoptive homes.

In Albuquerque, Rachael Lorenzo with Indigenous Women Rising doesn’t have a lot of patience for the lingering discussion of a reservation loophole for abortion care.

“Stop f-ing asking me,” they said with a laugh. “I really cringe at that question. To assume that tribes are a catch-all to save especially white women who are afraid is not fair and has a lot of undertones of racism.”

They’re focused on the deluge of requests for help that are likely to flood their fund’s inbox now that Roe is overturned, and that their abortion fund doesn’t yet have the capacity to handle.

“We need funding for our operating expenses,” Lorenzo said. “I really need help making sure we can expand our staff, because the staff we have are so incredible, but we’re tired. All of us are very tired.”

With the cost of gas and airfare rising and the distance between patients and providers growing more vast, Lorenzo said the fund’s work is getting more expensive.

In June, Indigenous Women Rising paid out its monthly budget of $10,000 to patients on the first of the month. This past week, it’s seen an influx of donations. In July, it has twice as much to spend.