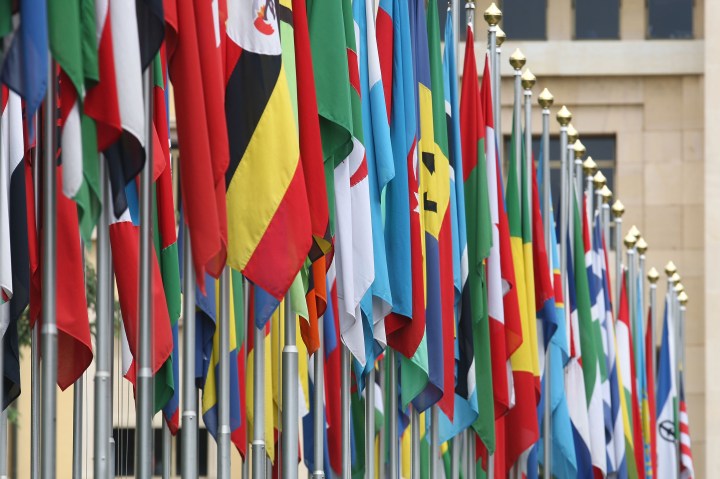 David Brancaccio and Erika Soderstrom May 17, 2022
Heard on:

David Brancaccio and Erika Soderstrom May 17, 2022
Heard on:

In order to solve the most pressing issues of our time — from global health emergencies and the climate crisis to disruptive and potentially dangerous new technologies — we’ll need new international infrastructure that enables cooperation across borders. That’s the argument made by Ian Bremmer, president of political-risk consultancy Eurasia Group, in his new book “The Power of Crisis.”

Despite the challenges ahead, Bremmer says there are distinct reasons for optimism.

“Right now, we are in a very target-rich environment in terms of crises, and a lot of the biggest opportunities to make a difference in the way the world is run is coming as a consequence of that,” he said in an interview with Marketplace’s David Brancaccio.

“When you think about climate change today, when you think about the pandemic today, you recognize these aren’t national challenges. These are fundamentally global challenges — but in an environment where the politics, both inside our own country as well as globally, are so deeply dysfunctional. And it’s the crises themselves that are creating the momentum for breaking through these difficulties.”

David Brancaccio: Global health, climate, it’s in the headlines every day. But, just so people understand, your number three threat here — not ranked, but number three, here — is technological innovation. A threat, really?

Ian Bremmer: Yeah, disruptive technologies, because you can’t contain them. This isn’t like nuclear proliferation. Whether we’re talking about cyber threats, for example, or lethal autonomous drones, these are increasingly in the hands of rogue states and small numbers of individuals. They can be incredibly dangerous to the global economy and to all of us as individuals. And clearly, as an unaddressed crisis, that would very quickly rise to the top of our list, so responding to it is incredibly important.

Brancaccio: Yeah, I mean, even just domestically, privacy and artificial intelligence potentially run amok. So with this as a subject, I was surprised and delighted to see the promise in your book of some optimism. And, Ian, I know you not to be a Pollyanna fellow, so what’s the mysterious source of the optimism that’ll help us address these?

Bremmer: Well, we know that over the last 20 years, the institutions, the trust in elites has been going down and a lot of people feel kind of hopeless about it. And yet, right now, we are in a very target-rich environment in terms of crises, and a lot of the biggest opportunities to make a difference in the way the world is run is coming as a consequence of that. Think about the Russian invasion of Ukraine — we right now have a State of the Union speech where Democrats and Republicans both stand and applaud Biden because they think Putin is a bigger threat than their opponents across the aisle. They didn’t think that before Russia invaded. Think about the Finns now and the Swedes soon joining NATO — we said it was brain dead, Macron said it was “brain dead” before the crisis. Now we have one, and now suddenly it’s not adrift, it actually has purpose. The Americans are looking more like global policeman, looking more like leaders with allies around the world in Europe and in Asia. Why? Because of Vladimir Putin. It turns out that in an environment where there’s a lot of ennui, people around the world need to be challenged a little bit harder. And that is something that we’re seeing in response to a lot of these crises right now.

Brancaccio: All right, some interesting examples, right, here in 2022, of people coming together, cooperation across national barriers. And one of your inspirations is cooperation between two people — one still with us, one no longer. President Ronald Reagan and Mikhail Gorbachev, the former Soviet leader. You never thought they would come together, but look what happened.

Bremmer: Look what happened. The first time they actually met in Geneva, Reagan had asked Gorbachev — it was kind of a strange question — he said, “If we were attacked by aliens, you’d defend us, right?” And Gorbachev said, “Yeah, sure.” And Reagan said, “Well, I would too.” And the funny thing is that actually was a breakthrough moment for arms control, for a world where we were facing weapons of mass destruction and we had the Cuban Missile Crisis. And when you think about climate change today, when you think about the pandemic today, you recognize these aren’t national challenges. These are fundamentally global challenges, but in an environment where the politics, both inside our own country as well as globally, are so deeply dysfunctional. And it’s the crises themselves that are creating the momentum for breaking through these difficulties.

Brancaccio: You point out this can’t just be driven by goodwill and good intentions. We may need some more international infrastructure?

Bremmer: It’s not that we need more. We need them to be different. The reason why our international institutions work so badly right now is because they’re outdated. The Security Council in the United Nations, Secretary-General António Guterres — a good friend of mine, on the back of the book — he came out a couple weeks ago and said it’s broken. The Secretary-General said the Security Council is broken. You know why? Because the Russians are being run by a war criminal, and they have a permanent vote. And the two countries that are most capable of making a difference in multi-lateralism aligned with the UN Charter rule of law can’t be made permanent members, because they lost World War Two — Japan and Germany. That’s a really stupid reason, and it’s not reformable, and so it implies you need a new one. And when Trump got rid of NAFTA and created the USMCA, the Mexico-Canada agreement, it was one of the smartest things he did, because the old NAFTA agreement — which was a fantastic trade agreement when we had it — by the time Trump became president wasn’t even reflecting 50% of our trade, because it became mostly services and data. Well, that wasn’t the nature of the trade relationship 40, 50 years ago, but it is now. And so you needed a new institution. That’s what we’re looking at, globally. We don’t have architecture to respond to to artificial intelligence challenges. You need a world data organization for that, the World Trade Organization won’t do that. We don’t have big organizations that are in place that allow us to respond to the pandemic. The WHO is way too small, way too weak. So you have to actually create this architecture.

Brancaccio: So what jumpstarts the actual process of doing that? I mean, look, it starts with your book, but what, do we have to convene a global conference or something?

Bremmer: Well, the pandemic made a big difference. Europe is a lot stronger coming out of the pandemic, as the EU, than it was coming in, because there was a recognition that this was so dangerous and damaging, economically, that the wealthy Germans and Danes and Dutch dug into their pockets. And they actually provided a Marshall Plan for the Greeks, who they were going to kick out just a decade before. And they built up much more support for the EU as a consequence. They also, all together, negotiated for and bought vaccines, so that poor countries and rich countries would all have them. That wasn’t because of my book, that’s because they recognize that COVID-19, you couldn’t respond to it as individual European nations. Climate change is doing that. And what’s interesting is the United States and China, the two largest emitters, aren’t the two leaders in responding to climate change. But a lot of young people around the world are demanding that change. Banks are deciding that, in 10 years time, we won’t make any money if we invest in fossil fuels. So they’re moving away from it. And that, in turn, is forcing corporations to make a difference. And the Europeans, and the Japanese, and mayors and governors in the United States. And suddenly, you have enough investment at scale that you can see a pathway towards a world, in the next generation, where a majority of our energy doesn’t come from fossil fuels. That’s an extraordinary thing to be able to say, and it’s come as a consequence of this crisis.