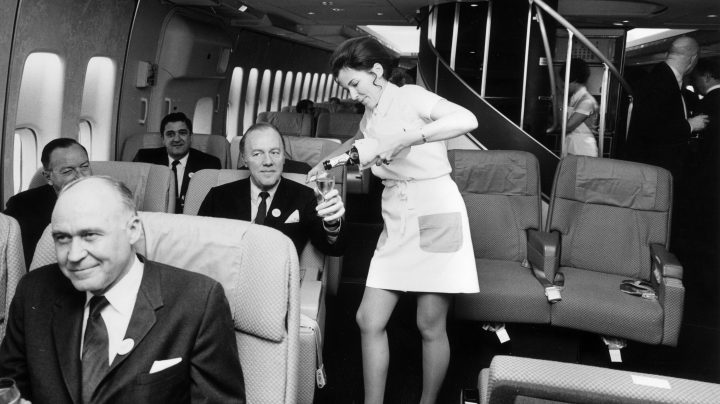 The Federal Aviation Administration is making its zero-tolerance policy for unruly passengers permanent, even after news broke this week that a federal judge struck down the mask mandate on public transportation. Since the FAA policy was implemented in January 2021, there have been a record 7,200 unruly passenger incidents reported by airlines and flight attendants.

This is far from the first hardship flight attendants have faced on the job. “The Great Stewardess Rebellion: How Women Launched a Workplace Revolution at 30,000 Feet,” a new book by Nell McShane Wulfhart, tells the story of how female flight attendants organized in the 1960s and ’70s to fight sexism, low pay and more, winning rights for working women in other professions as well. The following excerpt from the book follows Patt Gibbs, who went on to become a union leader, as she applied for a stewardess position at American Airlines.

At five foot three and 121 pounds, Patt wasn’t Barbie-slim. And slim was a requirement. Weight limits were uncompromising at every airline. At the same time Patt was considering her new career, an article titled “A Tale of the Scale” appeared in The Delta Digest, the airline’s employee magazine. It told the story of stewardess Hildy Hoffman, who was five foot three and had weighed 170 pounds in high school. She lost fifty pounds in one summer, plus an extra five as requested by the airline, and was rewarded with a job. “I love it,” Hildy was quoted as saying. “It’s every bit as interesting and exciting as I thought it would be, even if hard work too. And I don’t miss a single one of those pounds I gave it up for.”

If Patt was going to make it to training school, she’d have to drop a few pounds like Hildy. She put herself on a strict diet. And it worked. Filling out the application for American Airlines, she happily entered “110 pounds” in the blank space for “weight.” The form also required her bust, waist, and hip measurements, her marital status, disclosure of debts or a criminal record, and whether she rented or lived with her parents. She filled it out, sent it off, and went back to the set to learn her lines.

Different airlines preferred different kinds of stewardesses. These women were the most visible of the airlines’ employees, after all; they were walking, talking brand representatives. Pan Am, with its international routes, looked for elegance, sophistication, and a cosmopolitan air. United, wanting to appeal to the middle-class American, looked for a girl-next-door type. TWA, like Pan Am, wanted its “air hostesses” to project exclusivity and worldliness. Pacific Southwest was known to hire the blonde and pert, with an hourglass figure strongly preferred. Delta, based in the South and priding itself on its conservative nature, hired for “high moral character”; its recruiters were known to prefer a demure, wholesome smiler to a bombshell. Delta’s ads boasted about its stewardesses’ “superior background,” and claimed that “we can’t give her that gracious air, that friendly spirit. They come of home and heritage.” Delta’s evocation of old southern traditions was code for white and Christian; the homes and heritage it was scrutinizing in its search for candidates were pretty uniform.

American Airlines steered a course between worldly, respectable, and sexy, landing on its perfect stewardess: the “all American” girl. I could do that, Patt thought. She knew she wasn’t a bombshell, but she figured she could pull off sweet and cute.

The reason Patt had known she was too fat for the job was because the recruitment material made no bones about what the airlines were looking for. A New York Times classified ad for Eastern Airlines requested “a high school graduate, single (widows and divorcees with no children considered), 20 years of age (girls 19 1/2 may apply for future consideration). 5’2″ but no more than 5’9″, weight 105 to 135 in proportion to height and have at least 20/40 vision without glasses.” Patt never wore makeup or spent much time on her hair, but she had clear skin and was newly thin; she figured it was worth a shot. Besides, she couldn’t spend the rest of her life as a recurring character on Gracie’s Good Neighbor.

She was offered an interview in March 1962. Patt’s father drove her to Love Field, the Dallas airport. She dressed modestly, with her short hair curled in a bang over her forehead. An interviewer named Fred Hazard began by looking her up and down. He asked her to walk over to the wall, turn around, and walk back. He brought his face near to hers to examine her complexion, looked closely at her hair. He had her show him her hands so he could check for scars and signs of nail biting. Patt suddenly felt a discomfiting resemblance to a prize steer at auction. At the end of the interview, he sat her down and said, “Well, I’d like to give you an opportunity to become a stewardess, but you’ve got a space between your two front teeth, about an eighth of an inch. If you can do something with those teeth, send me a picture and then we’ll see.”

Energized, Patt went back to Springfield and made an appointment with a dentist. “How soon can you pull these teeth together?” she asked him. He fitted her for braces and had her come back once a week for tightening. Her mouth was always in pain, but she comforted herself with the fact that the pain meant she ate less. Fred Hazard had given her a May deadline to send the photo, so she had the dentist take the braces off after a couple of months, smiled wide for the camera, and sent the snapshot off to Hazard. Within a week, her acceptance letter had arrived. She was to report to training school in June.