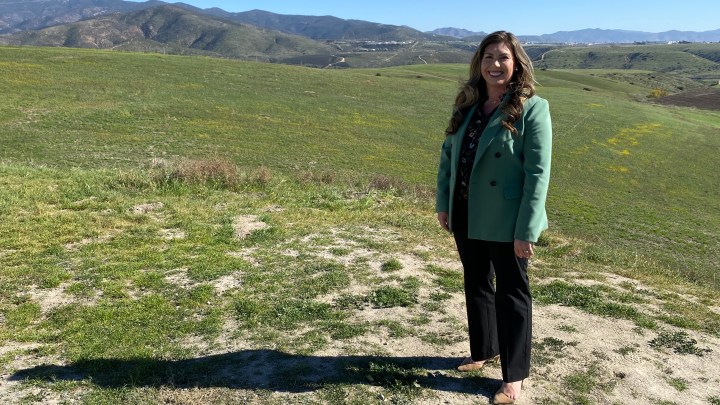 COPY
Miranda Evans, special projects manager for the city of Chula Vista, stands on the site that the city has designated for a university or group of universities. Jill Replogle/KPCC

Miranda Evans, special projects manager for the city of Chula Vista, stands on the site that the city has designated for a university or group of universities. Jill Replogle/KPCC
Listen Now

California has too many qualified students for the number of spots available in the state’s four-year public universities.

And yet, one of the most popular universities in the country, the University of California, Berkeley, recently came close to rejecting even more applicants than usual after a neighborhood group sued over the impact of students on local housing and quality of life. The state legislature countered with a legal fix.

But why not just build another campus? About halfway between downtown San Diego and Tijuana, Mexico, a community has been trying to attract a college campus for some 20 years.

The city of Chula Vista owns 383 acres of rolling hills with a master plan for a university village. Miranda Evans, who’s in charge of special projects for the city, can imagine a hypothetical student’s day.

“I would wake up, I would do a run on the beautiful Chula Vista bayfront,” she said. Then classes. “And then I’d go to my internship for the day.”

Evans even has thoughts on where students would go for a beer.

“I would walk right down the street to Novo Brazil. They are a really great brewery,” she said, laughing.

State leaders have considered the site — and others — for a potential new public university campus but ultimately decided not to move forward.

“The call is for our public higher education systems to respond to that demand,” Johnson said.

But building a new campus is an expensive and lengthy process. There may be easier ways to make more seats for students, said Audrey Dow, senior vice president of the nonprofit Campaign for College Opportunity — like offering more weekend classes and hybrid learning.

“If we continue to think about education and the delivery of education in a typical bricks-and-mortar way, then we’re not going to meet the challenge that’s before us,” Dow said.

The city of Chula Vista is already thinking outside the box. Evans said the city is now trying to attract a consortium of higher education institutions, ideally including a Mexican university.