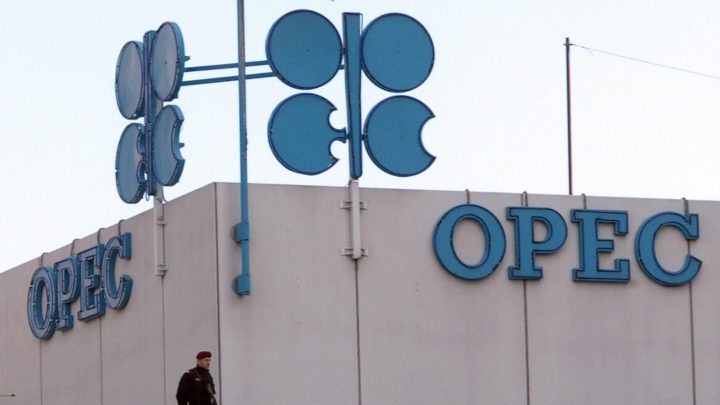 COPY
OPEC Plus nations are together responsible for 40% of the world's oil supply. Jakub Sukup/AFP via Getty Images

OPEC Plus nations are together responsible for 40% of the world's oil supply. Jakub Sukup/AFP via Getty Images
Listen Now

OPEC Plus, the cartel of 23 oil-producing nations created in 2016, meets tomorrow. At the group’s last meeting, which took place less than a week after the Russian invasion of Ukraine, the group declined to take steps to cool the oil market despite the rising price of a barrel of oil.

Abhi Rajendran, a director of oil market research at Energy Intelligence and research scholar at Columbia University’s Center on Global Energy Policy, joined “Marketplace” host Kai Ryssdal to discuss his sense of how OPEC Plus is likely, now, to proceed. The following is an edited transcript of their conversation.

Kai Ryssdal: Before we get to the news of tomorrow, could you give the lay person an understanding of exactly how much oomph OPEC Plus has in the global oil markets?

Abhi Rajendran: Sure. I mean, I would say, you know, OPEC Plus is a pretty vital component of the oil market. They account for, you know, over 40% of global oil supplies. So they are very important. But they also have their limitations, in terms of how much they can actually do to influence this market.

Ryssdal: Well, so let’s talk about those limitations here for a second, right. Because, look, the world needs more oil, they could pump more if they wanted to, I suppose … but they’re not. What gives?

Rajendran: Sure, yeah. So OPEC Plus about six months ago set off on this plan to gradually add more supply back to the market. They’ve basically lagged that target every single month, since they set out on this course, to the point where, in the last month, they are roughly a million barrels a day behind schedule. This is largely a function of the fact that there’s just been so much underinvestment, even within the group, over the last couple of years. And the pandemic hit them pretty hard, and they’re still struggling to come out of it.

Ryssdal: But here we are now in a world where oil has … I mean, it’s down a little bit, but it’s been as high as $130 a barrel within the last number of weeks. There is that global risk premium. It would seem to make sense, if I were a person pulling oil out of the ground, to do as much as I possibly could.

Rajendran: You would think so. I think there are a couple of factors at work here. One, what OPEC Plus has in terms of reserves, in terms of spare capacity that they could realistically bring back to the market has been vastly overstated. You know, there have been numbers as high as three, four or five million barrels a day. The real number is probably, you know, at best, around one-and-a-half to two million barrels a day. And it is heavily concentrated in Saudi Arabia and UAE. You know, if they were to do that, it would almost look like they are kind of opportunistically taking advantage of this, and effectively stealing market share. And that’s just not something that they’re willing to do. They want to keep the group together and, of course, a big part of that group is Russia.

Ryssdal: But to that point about not wanting to alienate Russia. So first of all, one could make the case that Russia has alienated itself from the world, right? But the reality is that Russia is going to be in a world of hurt, economically, for a very long time. And I guess the question is, why do you suppose OPEC Plus is sticking with the Russians at this point?

Rajendran: Yeah, I would say it’s a very important question because this is, you know, right at the core of why OPEC Plus, and especially the Saudis and Emiratis, will not do much different. [It] is because their political links are still quite strong to Moscow. The rest of OPEC Plus, they’re more looking at this from the producer perspective, saying ‘We all kind of need to stick together.’ It is also, you know, fairly convenient, because with high prices they’re generating a ton of revenue, and that suits them just fine. So, you know, really not a whole lot that we’re looking for in terms of them budging, there.

Ryssdal: So look, let me ask you this. Crystal ball this thing for me, right. What I hear you saying is: No OPEC Plus extra supply of meaningful amount coming anytime soon, which, to an observer, translates into oil above $100 barrel for a while, yes?

Rajendran: I think that’s fair. I think OPEC Plus group is going to kind of stay the course and only gradually add supply. You know, and along with that, what we expect is that even if there were some sort of a ceasefire or an agreement agreed to between the Ukraine and Russia, we don’t think the sanctions are going to go away, right? So definitely an impact on Russian supply that’s going to hang around for a while, at least like the next several months, quarters, and as you noted, it could it could last for years to come. And all of this is a recipe for $100-plus oil over the near term, you know, especially over the next couple of months going into driving season. And the question is, how high does it go? And how long, and what does that do to demand? We don’t expect that much change in U.S. demand. But I think at some point when prices get high enough, you’re going to start to see an impact on emerging market demand, certainly on demand in Europe. And that will be your rebalancing factor to bring prices back down.