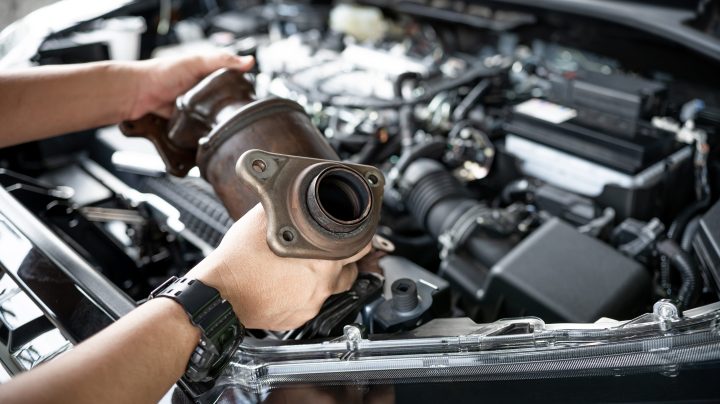 COPY
"You can get anywhere from $60 to $100 in recycling a catalytic converter, but you end up costing the victim thousands of dollars in repairs," says Avo Bagramyan of Automotive in Los Angeles. Getty Images

"You can get anywhere from $60 to $100 in recycling a catalytic converter, but you end up costing the victim thousands of dollars in repairs," says Avo Bagramyan of Automotive in Los Angeles. Getty Images
Listen Now

Palladium is a rare and precious metal that’s used in jewelry, dentistry, flutes and in the catalytic converters that are part of car exhaust systems.

Russia is the world’s biggest palladium producer, so after Russia invaded Ukraine, the price of the metal, like many other commodities, skyrocketed. Now it’s back to normal — at least, normal for 2022 — at about $2,500 an ounce. It’s still five times as expensive as it was just a few years ago.

Avo Bagramyan, who runs Avo’s Automotive in Los Angeles, said he’s been getting a special kind of call recently, and a lot of them.

“I’ll get a phone call and someone will be like, ‘Hey, I went to go start my car this morning, and it was very, very loud.’ And right away, we can make the determination that, ‘Hey, you know, it was a catalytic converter theft,'” Bagramyan said.

Catalytic converters break down the most toxic parts of car exhaust. They cost up to a few thousand dollars, and thefts of the devices have risen dramatically. In 2021, State Farm Insurance said it paid $62 million for more than 32,000 stolen catalytic converters. That’s 13 times more than in 2019, before the pandemic.

“The converter is full of very small amounts of rhodium, palladium, platinum, all these precious metals that when you do break them down and recycle them and separate them, you know, it adds up,” Bagramyan said.

Bagramyan said the converters can’t be sold or scrapped in the United States very easily, so they’re shipped abroad to be recycled.

“You can get anywhere from $60 to $100 in recycling a catalytic converter, but you end up costing the victim thousands of dollars in repairs,” he said.

“The last five-plus years, palladium has been in deficit, meaning industry has consumed more on a yearly basis than is come out of the ground, and they’ve been burning down inventories,” said Chris Blasi, head of Neptune Global Holdings, a precious metals dealer and exchange.

In a classic example of how interconnected the world’s supply chains are, the price of palladium came down for a while last year because the semiconductor shortage meant car companies were building fewer cars and needed fewer catalytic converters. But then came the war, and Russia produces 40% of the world’s palladium, so when there were fears that it would be cut off from the global supply, there was panic.

“And we saw a wave of stockpiling,” said Kirill Kirilenko, a precious metals analyst at CRU International in London.

The price surged to an all-time high of more than $3,300 an ounce earlier this month. The fears appear to have subsided, and the price has come back down a bit.

BASF, a major producer of catalytic converters, told Marketplace its supply of metals from Russia hasn’t been affected, but if it was, the company could switch to other palladium sources. Still, brand-new supplies can take a decade to ramp up, and Kirilenko and other analysts are uneasy.

“We have seen a lot of sanctions imposed on Russia, but Russia is starting to retaliate now,” Kirilenko said. “This would be interesting to see whether it decides to restrict supply of palladium.”

That could drive up the price of catalytic converters and make new cars even harder to get.

“I would argue that the supply chains for these critical materials like palladium are still somewhat imperiled,” said Chris Berry, president of House Mountain Partners. Berry has been tracking metals for years.

“Many believed that date was gonna be around 2025, but when you have multiple critical battery metals going parabolic from a pricing perspective, that tipping point will be delayed by a year or two,” Berry said.

Meanwhile, Avo Bagramyan said if you have a car with a particularly easy-to-steal converter, like a Toyota Prius or Honda Element, you can buy steel plates to seal them up and put them out of the reach of thieves. It may not affect the global supply chain much, but it might just save you some money.