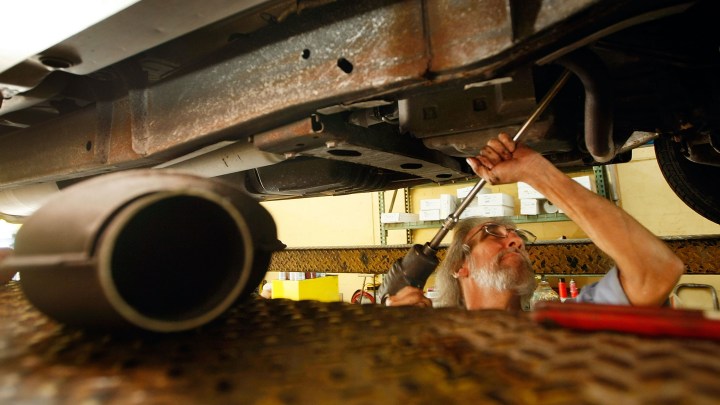 Jean Bentley is a retired nurse from St. Paul, Minnesota, who, back in January, picked up a shift at a nearby clinic that was short-staffed for the day.

When her shift was over a little after 5 p.m., she walked out to the parking lot to start her car.

Bentley knew immediately what that noise meant. She had friends and neighbors who also had catalytic converters sawed off their cars. She had insurance to get it fixed, but her deductible was $1,000.

“So I just had to bite it. You’ve got to get it fixed. But it’s a shame, you know, when you’re trying to work extra shifts and help out, and then you’re paying extra money instead of saving,” she said.

Thieves have been stealing more and more catalytic converters across the country over the past year, from St. Paul to Los Angeles to Dallas, as the value of the precious metals they contain skyrockets.

According to the National Insurance Crime Bureau, in 2019, on average, 282 thefts were reported each month. Last year, that number jumped to about 1,200 per month.

“The problem is that they’re just worth so much,” said Paul Dauenhauer, a chemical engineering and materials science professor at the University of Minnesota. “We think of platinum as more valuable than gold. But rhodium is 10 times more valuable than platinum. So in the end, even if [there’s] just a small amount of metal in a catalytic converter, it’s just worth so much per ounce.”

Catalytic converters are muffler-shaped devices installed on the undersides of vehicles. When cars and trucks burn gas, the exhaust has harmful contaminants in it, including nitrogen oxide, which is the stuff that causes acid rain. Catalytic converters break down those compounds before they’re released into the air.

“And we need that to happen really fast because you can imagine that the gases leave the engine very fast and come out the exhaust pipe,” said Michael Moats, a professor of metallurgical engineering at the Missouri University of Science and Technology. “So we need to have highly active metals to promote those chemical reactions.”

And the best metals to do that are the platinum-group metals, which also include palladium and rhodium. As the prices of those metals have soared, catalytic converter thefts have spread across the country, even to Rolla, Missouri, where Moats lives. It’s about 100 miles outside St. Louis.

“It is everywhere,” Moats said. Recently, “the catalytic converters were stolen off of our church vans.”

Thieves can slither under cars and saw them off in just a couple of minutes.

“We’d frequently see reports where an officer would pull over a vehicle for a traffic violation. And one thing would lead to another, and they’d find a trunk full of catalytic converters, and a Sawzall and jacks, and things like that,” said St. Paul Police spokesperson Steve Linders. He said reports of thefts have tripled in the first two months of 2021 compared to the same period last year. “Unless we catch them in the act, there’s not a lot we can do.”

That’s because there’s no way to trace a catalytic converter back to the car it was stolen from.

Linders said a single catalytic converter can fetch up to $300 at a scrap yard.

Lawmakers in 18 states, including Minnesota, have proposed legislation to restrict the sale of catalytic converters.

In the meantime, a lot of car owners, including Jean Bentley, are taking matters into their own hands and having specialized locks installed under their cars to deter thieves.

Bentley said hers cost another $250 on top of her $1,000 deductible to get it replaced.

Still, it’s a lot less than the couple of thousand dollars it can cost for a replacement.