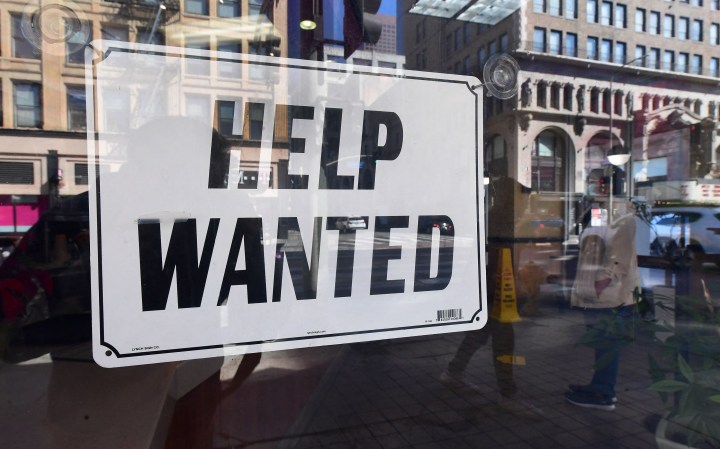 A "help wanted" sign is posted in front of restaurant on Friday in Los Angeles, California. The United States added an robust 428,000 jobs in April, according to Labor Department data. Frederic J. Brown/AFP via Getty Images

A "help wanted" sign is posted in front of restaurant on Friday in Los Angeles, California. The United States added an robust 428,000 jobs in April, according to Labor Department data. Frederic J. Brown/AFP via Getty Images

The monthly jobs report released on Friday came bearing some good news: The U.S. economy added 467,000 jobs in January, far more than the 150,000 than some economists expected.

Jobs numbers for November and December were also revised, showing that the U.S. added about 700,000 more jobs than were initially reported.

In a speech at the White House on Friday, President Joe Biden lauded the strength of these figures, stating that “America’s job machine is going stronger than ever.”

That same day, Biden also tweeted a chart highlighting how many jobs presidents created, on average, per month.

Be cautious about jobs numbers charts

Chris Douglas, an associate professor of economics at the University of Michigan-Flint, said this chart is misleading because Trump had negative job creation due to the shutdown back in early 2020 during the beginning of the pandemic.

The U.S. economy ended up losing more than 20 million jobs in April, with the unemployment rate rising to 14.7%.

Douglas said when people think about job creation, they interpret that as meaning new jobs are being created that did not exist before, causing total employment in the economy to rise. In this case though, a lot of the jobs that are being counted are actually jobs that were lost earlier in the pandemic.

Douglas pointed out total employment numbers still haven’t recovered to levels prior to the pandemic — there are more than 149.5 million jobs in the economy right now compared to about 152.5 million in February 2020, according to data from the Bureau of Labor Statistics.

The economic recovery also hasn’t been as robust for women and people of color, as Marketplace has previously reported.

How much credit can you really give presidents?

Trump, during his presidency, also took credit for job gains, and touted misleading jobs numbers during the first few months of the pandemic. In August 2020, following the economic downswing caused by the COVID-19 crisis, Trump tweeted a chart exaggerating the number of U.S. jobs that had been recovered.

While presidents have taken credit for job gains, some economists say you can’t really attribute increases to them.

“Month-to-month job creation is just a function of the dynamic U.S. economy that’s bigger than one person,” Douglas said.

“We have a political cycle that has a very specific timeline. The economy is just a system that continues to evolve and to make progress independently of that,” Flores-Lagunes said, pointing out that the economy doesn’t know what time of year it is.

But Douglas said you could potentially credit presidents in cases where they, for example, implement a sweeping economic policy.

So what are examples of particular policies that have led to increases? Flores-Lagunes said after the Great Depression, there were New Deal policies that created jobs through the Public Works Administration, which helped build infrastructure in the U.S.

“I think that a lot of people would agree that those kinds of policies can be attributed to job creation,” Douglas said.

While experts say it’s generally hard to tie job gains to a given president, economists Alan S. Blinder and Mark W. Watson have shown in their research that the economy has performed better under Democratic presidents compared to Republican presidents.

In their paper, Blinder and Watson wrote: “We find that oil shocks, productivity shocks and, depending in the sample, defense spending, foreign economic growth, or a measure of consumer expectations jointly explain as much as 70% of the partisan gap.”

However, the two continued, “some, maybe all, of these might be considered blends of good policy and good luck. But our empirical analysis does not attribute any of the partisan growth gap to fiscal or monetary policy.”

Douglas said there are a lot of factors complicating the association between job creation and political party —  you have to consider how often the White House changes parties, at what point during the presidency we should begin counting jobs numbers, and also take into account that recessions occur with some regularity.

In politics, Douglas said, “you want to take credit for the good things that shift the blame to others for the bad things.”