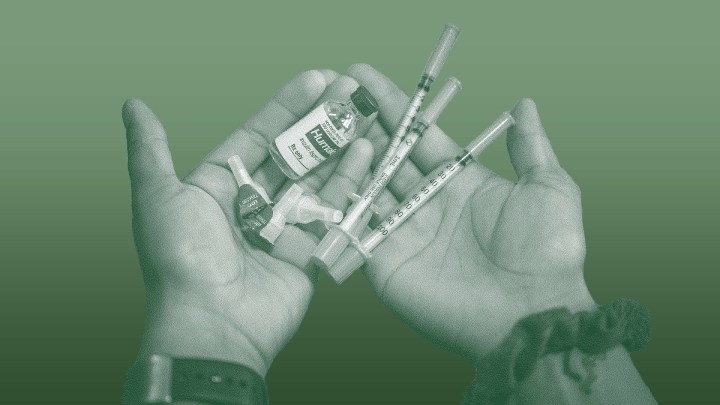 One in four diabetics has rationed insulin because of its cost. Photo illustration: Julia Schiff/Marketplace. Photo: Kerem Yucel/AFP via Getty Images

One in four diabetics has rationed insulin because of its cost. Photo illustration: Julia Schiff/Marketplace. Photo: Kerem Yucel/AFP via Getty Images

Remember Build Back Better? That climate-, infrastructure- and social-focused bill that we’ve talked quite a bit about? The one that’s been stalled by Sen. Joe Manchin?

Well, blink and you could miss it: Toward the bottom of page 2,355 of the bill, in all the political jargon, you’ll see the first mention of the word “insulin.”

For a lot of diabetics — whose pancreases do not secrete enough or any insulin and may require insulin injections to regulate their blood glucose — its inclusion in Build Back Better was a big deal. That’s because the bill would have limited monthly out-of-pocket copays to $35, in what would’ve been the most transformative legislation aimed at addressing the costs of insulin ever passed by Congress.

In the U.S., more than 34 million people have diabetes and more than 7 million people require insulin. Over the past decade alone, the cost of the hormone they need to stay alive has tripled.

In 2016, one estimate found that diabetics spent close to $6,000 annually on insulin alone. Diabetes is now the most expensive chronic illness in America.

Nearly a century ago when insulin was discovered, its creators intended it to be affordable and accessible. What happened?

It was 1922, and Leonard Thompson was unwell. The 14-year-old in Toronto weighed 65 pounds. Thompson was a Type 1 diabetic, and treatment at the time consisted of fasting and careful regulation of diet — that is, attempting to avoid elevated blood glucose through what was essentially starvation.

At the time, a diagnosis of Type 1 diabetes was a death sentence, according to Christopher Rutty, a professional medical historian and adjunct professor at the University of Toronto. It was clear, Rutty said: Thompson was dying.

That’s why on Jan. 11, 1922, in a desperate attempt to stay alive, Thompson’s family allowed doctors to administer an extract from beef pancreas. Thompson received two shots, one in each buttock. Though his blood sugar levels dropped, abscesses formed near the injection sites.

Two weeks later, after the extract was further purified, Thompson received another dose. It worked — no abscesses appeared, his blood glucose dropped into a normal range, and he quickly became more lively and active. The boy, who likely only had days or weeks to live otherwise, would go on to live another 13 years.

This was the first time that a Type 1 diabetic had been successfully treated with insulin. Its discovery won its creators the Nobel Prize and remains one of the most important medical discoveries of the 20th century.

A dream of accessibility

According to Rutty, the inventors of insulin intended the life-saving drug to be accessible.

“This was an issue then, a thought that this should be available for nothing, for free — or at least for a very, very little amount,” he said.

One of its creators, Frederick Banting, refused to put his name on the patent as he felt it would violate the Hippocratic oath to profit off of insulin. John Macleod, another co-creator, similarly declined. While two other stakeholders, Charles Best and James Collip, did end up patenting the invention of insulin, they sold it to the University of Toronto in 1923 for $1.

“[Insulin] belongs to the world,” Banting said. “Not me.”

Insulin has indeed changed since the days of Banting, Best, Collip and Macleod. In the decades following insulin’s discovery, Eli Lilly and Novo Nordisk were among the first two pharmaceutical companies to manufacture insulin on a large scale.

In the late ‘70s, the first synthetic insulin was created, soon replacing beef and pork pancreas derivatives. Drugmakers increasingly innovated and patented their own variations of insulin.

Today, three insulin manufacturers — Eli Lilly, Novo Nordisk and Sanofi — control close to 90% of the global insulin market. And because of the complexities of insulin itself, it’s expensive to reproduce, which is part of the reason there are no generic insulins on the market today. (Although some cheaper brand-name insulins do exist.)

Rutty likes to think of it this way: We have better insulin today, but nothing better than insulin. And among developed countries, lack of access to insulin is uniquely American.

“The U.S. kind of sticks out as a very large country, without a public health system, a state health plan, like almost every other country in the West has,” Rutty said.

Where Rutty is located, in Canada, the average manufacturer charges $12 for a unit of insulin. In the U.S., according to the RAND Corporation, it’s $98.70.

Numbers are one thing; the human toll is something else entirely. Some Americans have trekked hours across the border in search of cheaper insulin.

One in four diabetics has reported cutting down their required insulin intake because of the cost. This kind of rationing can lead to complications like amputations or blindness and, in some instances, can be lethal. The number of diabetics in the U.S. skimping on their insulin far outweighs the number in peer countries.

A century later, change is slow

More than a dozen states have passed legislation capping insulin copays, in some cases after tragic deaths.

Diabetics are living longer and innovations in blood sugar monitoring have improved self-regulation and care for diabetics — those are signs of progress.

But when it comes to affording insulin, Rutty’s a bit more uncertain. Its inventors desperately wanted anyone who needed insulin to have access to it, regardless of who they are or where they were. In the U.S., it can still be said that the wealthiest country in the world “has been losing the battle against diabetes.”

“I guess they would have expected, in some ways, something better,” Rutty said. “The whole rationale behind the patent, of having it entrusted to a public trust, was to ensure that [the production of insulin] was done as effectively and affordably as possible — not to be monopolized by one company or one group, but also to ensure that any developments or improvements were equally shared.”

Correction (Feb. 11, 2022): A previous version of this article misstated the field in which Frederic Banting and John Macleod won their Nobel Prize. The text has been corrected.