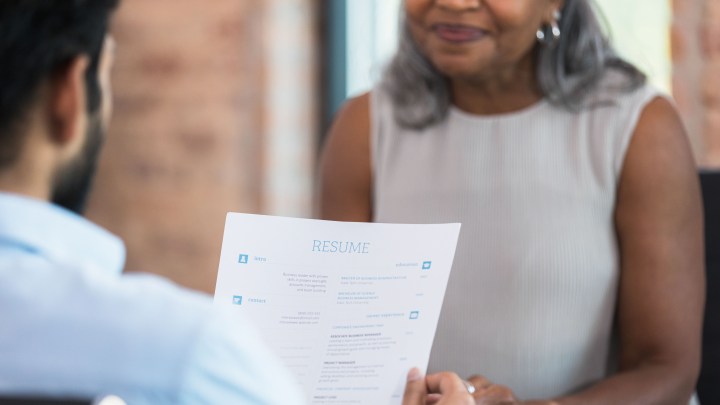 COPY
Women dropped out of the workforce in record numbers over the past year and a half. Will employers still view resume gaps as red flags? SDI Productions/Getty Images

Women dropped out of the workforce in record numbers over the past year and a half. Will employers still view resume gaps as red flags? SDI Productions/Getty Images
Listen Now

Women — and to a large extent, women of color — already have these gaps. They’ve been dropping out of the workforce in record numbers over the past year and a half due to layoffs, furloughs, children out of school, illness or to care for sick family members.

So are employers being more forgiving about resume gaps? And do they — and job seekers — need to think of those gaps differently?

For a long time, employers viewed holes in peoples’ employment histories as a red flag. But Kelsey Bensky, who supervises a career center in Newark, California, said that’s changing.

“They’re having to be more accommodating, more flexible, not just to attract new workers, but also to retain their workforce that they have,” she said.

You can thank the pandemic for that, Bensky said. The labor shortage has given job seekers more options. She knows because she’s hiring, too.

Now when she sees a gap on an applicant’s resume, “it isn’t as much a concern for me anymore,” Bensky said. “I understand that there’s a lot of reasons over the past few years that people may have left the workforce voluntarily or involuntarily. So I definitely am part of that shift.”

Because of the pandemic, these gaps are now widespread, according to Rhonda Vonshay Sharpe, a labor economist who heads the Women’s Institute for Science, Equity and Race.

“A lot of folks across race, gender, ethnicity, class educational attainment are going to have these gaps,” Sharpe said.

And that means resume gaps may lose some of their stigma. Sharpe said that gives female job seekers from marginalized backgrounds leverage they didn’t have before.

“I think employers who do not respond well to that are going to find themselves on the less desirable end when it comes to employment.”

Hiring managers are looking at a broader range of applicants than they might have before, said Marlene Kim, an economics professor at the University of Massachusetts Boston.

That’s if they want to get hired at all.

Sharpe said that when the pandemic is over, she expects many of these women will turn away from traditional jobs in favor of becoming their own bosses.