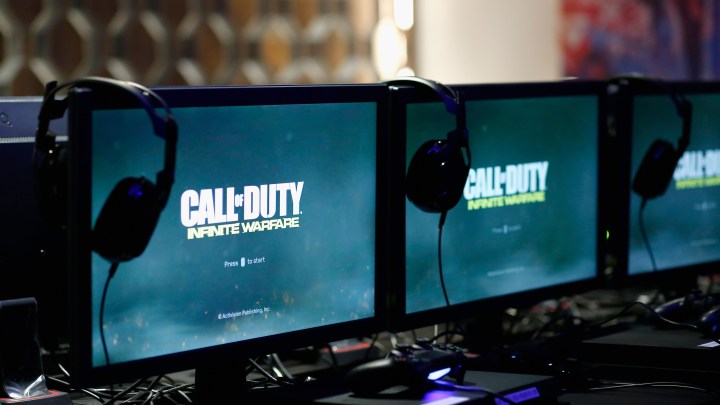 COPY
Though Microsoft may be challenged to fix Activision’s workplace culture, the deal will give the software company more weight in the video game industry. Rich Polk/Getty Images for Activision

Though Microsoft may be challenged to fix Activision’s workplace culture, the deal will give the software company more weight in the video game industry. Rich Polk/Getty Images for Activision
Listen Now

Microsoft announced Tuesday that it’s buying Activision Blizzard, the maker of hit video games like Call of Duty, Candy Crush and World of Warcraft, among others.

Microsoft will shell out nearly $69 billion in the deal, its largest acquisition ever. It’s a big move for the tech giant — but not a huge surprise.

When you think of Microsoft, your mind probably doesn’t go to shoot-’em-up video games like Call of Duty. The software maker has sort of a button-down shirt reputation.

“Microsoft became a juggernaut, you know, with computer software you use in your office,” said Margaret O’Mara, who studies the tech industry at the University of Washington.

Now, Microsoft already has Xbox and a couple of video game studios, but O’Mara said the purchase of Activision Blizzard takes it to another level.

“This is not just video games played by kids or teenagers in their rec rooms,” she said. “This is a massive global industry with billions of users.”

Activision Blizzard has recently been accused of gender pay disparities and widespread sexual harassment in the workplace — a “hailstorm” of bad public relations, as O’Mara called it.

“Revelations about its workplace culture have spilled out into the public eye, where there’s new employee activism and pushback against the way that it is run,” she said.

Activision Blizzard’s culture is a key challenge for Microsoft, but the acquirer now has an opportunity to improve that problematic culture, according to Kate Edwards, an industry consultant with Geogrify.

“You have maybe like, the older sibling come along and say, ‘Hey, I’m going to help you out. I think I can fix some of the issues that you’re dealing with,'” she said.

Of course, Microsoft is in this for profit. It wants to stake out territory in the lucrative so-called gaming metaverse, per Tom Bittman, lead Microsoft analyst for Gartner.

“There’s a land grab going on right now to take a position in gaming and in cloud computing and social software,” he said.

The tech players that grab those businesses now, Bittman added, are going to be the strong ones in the future.