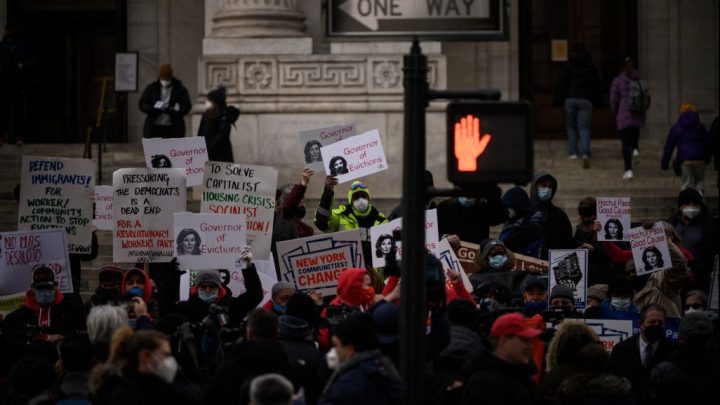 COPY
Protesters block a road outside the governors office following a march calling for an extension to the eviction moratorium on January 14, 2022 in New York, New York. The moratorium expired on Saturday, Jan. 15. ED JONES/AFP via Getty Images

Protesters block a road outside the governors office following a march calling for an extension to the eviction moratorium on January 14, 2022 in New York, New York. The moratorium expired on Saturday, Jan. 15. ED JONES/AFP via Getty Images
Listen Now

New York State’s eviction moratorium expired over the weekend. It was one of just two states – along with New Mexico – that still had a ban in place, almost two years into the pandemic.

New York first put an eviction ban in place in March of 2020.

David Dworkin at the National Housing Conference says it was always intended to be a short-term fix.

“The moratorium has prevented what could have been a devastating wave of evictions during the worst phase of the pandemic,” Dworkin said.

But he says it has also cost landlords billions of dollars.

“Most landlords in this country are small mom and pops who own very few units and are struggling just as much as their tenants, in many cases,” Dworkin said.

But Emily Lemmerman at the Eviction Lab at Princeton University says New York has already gone through almost all of the more than $2 billion it received.

“In New York State, we have the highest share of renters of any state in the nation. And we got the least rental assistance on a per-renter household basis,” Lemmerman said.

The state and city have asked for more funding. In the meantime, tenants can still apply for assistance. Which will protect them from eviction for now.