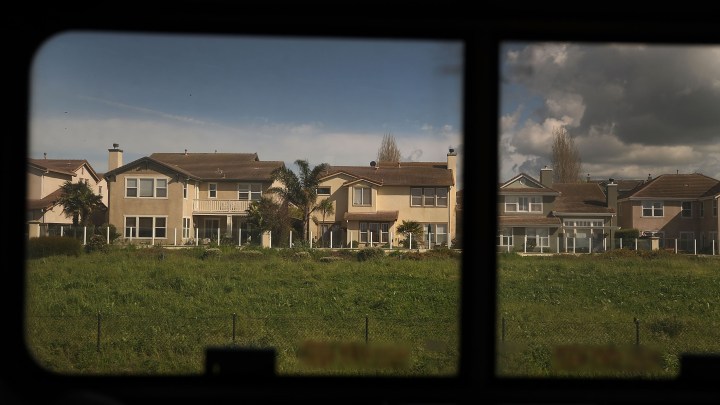 COPY
While many insurance companies leverage big data and artificial intelligence to calculate insurance rates, advocates say it can produce disparities between urban and suburban residents. Above, a suburban neighborhood in Richmond, California, viewed from an Amtrak train. Joe Raedle via Getty Images

While many insurance companies leverage big data and artificial intelligence to calculate insurance rates, advocates say it can produce disparities between urban and suburban residents. Above, a suburban neighborhood in Richmond, California, viewed from an Amtrak train. Joe Raedle via Getty Images
Listen Now

A number of consumer studies in recent years have raised the alarm about the use of factors like credit scores, college degrees and ZIP codes in setting rates for home and auto insurance. Advocates say it can result in proxy discrimination, with people of color in urban neighborhoods sometimes charged hundreds of dollars more for coverage than their suburban neighbors.

Now, some regulators say they’re pressuring the insurance industry to rethink its relationship with “big data” and artificial intelligence.

Fifty years ago, setting a rate for, say, an auto policy depended on just a few measures: Where you lived, your age and gender, your vehicle and what kind of driver you were. Dave Snyder of the American Property Casualty Insurance Association said that tended to result in three tiers of rates.

“’Really good,’ ‘kind of average’ or ‘really bad.’ The problem is, those broad categories really treated a lot of folks unfairly in each and every one of them,” Snyder said.

Snyder said now, because insurers can buy all kinds of data about you, you should be quoted a rate that’s much more personalized.

“We’re much more capable of setting a price that reflects each individual insured’s exposure to future risk,” he said.

“I’m not sure any of us actually understands how our data is being used right now,” said Connecticut Insurance Commissioner Andrew Mais.

Complex algorithms crunch hundreds of data points about each consumer, many of them bought from unregulated vendors. One Mais said he’s seen used in setting home insurance rates is the number of households in your neighborhood that include a grandparent.

“The neighborhood unemployment rate, the average number of occupants per household, the distance to the nearest restaurant,” he said. “I don’t think it’s too much of a stretch to think that that could be discriminatory inherently.”

Mais is the first Black person to be commissioner in Connecticut, and he’s urging reform. In 2020, the National Association of Insurance Commissioners acknowledged the centurieslong history of racial discrimination in the industry and formed a special committee to consider action.

One year later, it has promised more research and also suggested the industry collect racial data on customers to begin to measure disparate impacts.

But some advocates say they aren’t satisfied.

“In reality, they have not moved the ball forward at all,” said Doug Heller of the Consumer Federation of America. “If you are required by state law to buy auto insurance, then state regulators have a special obligation to make sure it’s fair.”

Heller points out Colorado and California are among states that have taken steps to hold the industry to account.