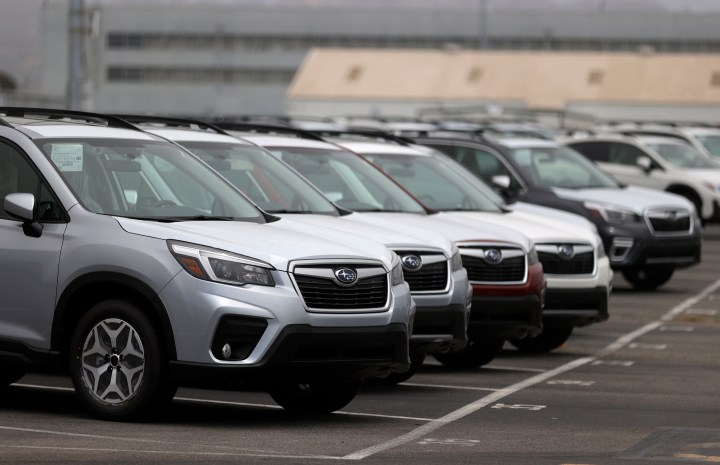 The global semiconductor shortage could continue until the second half of next year, according to a projection from chip supplier Foxconn.

A longer chip shortage could easily mean higher prices for goods like cars, adding to inflationary pressures. But that forecast from Foxconn also means people’s expectations that prices will go up will lead them to ask for higher wages to afford said goods. Businesses then raise prices to compensate, leading to a continuing cycle of inflation based on expectations.

Are we in danger of entering that cycle? “Marketplace Morning Report” host Sabri Ben-Achour discussed the question with Betsey Stevenson, professor of public policy and economics at the University of Michigan. Below is an edited transcript of their conversation.

Sabri Ben-Achour: So Foxconn, one of the world’s major contract producers of chips, says the shortage there, which affects so many industries, is going to be with us well into 2022. Does that worry you?

Betsey Stevenson: Well, you know, I think it’s really important to think about the fundamentals of where inflation is coming from, and it comes from a place where demand is outstripping supply. With the chip problem, what we saw was the pandemic changed the way we lived and those changes led to us wanting to consume a lot of goods that use chips. And so demand for microchips is running more than 50% higher than supply. What we need to see is to see supply expand, and until supply can sufficiently expand, we’re going to see inflation in the price of the goods that use those chips. And it might even be secret inflation. You know, one of the things that carmakers are doing is dropping some of the perks in your car that used to involve a chip. You know, there might not be heated steering wheels or heated seats, but they don’t have the chips. And so they want to think about, you know, how to slow their advancement of what we’re capable of doing from a technology point of view but not capable of doing because we haven’t built up production of chips sufficiently to meet the demand. The problem is that there’s been a pretty slow response, but I think we’ll get there. So when it comes to something like chips, I don’t see that as something that’s going to contribute to long-run inflation pressures. In fact, I suspect that they’re going to build new factories, that they’re going to expand capacity and that we’ll see that, that supply ultimately expand sufficiently to meet demand.

Ben-Achour: How long do you think this elevated inflation is going to be with us?

Stevenson: You know, I think that inflation in 2022 will be at a lower rate than inflation in 2021. I think sometimes when people think about inflation, you know, they think that the problem is the price is getting higher. But the problem is really demand outstripping supply, and inflation is a way to bring that into balance. There are other ways to bring that into balance. And I think that how long, you know, higher-than-normal rates of inflation last depend on what we do to bring that into balance. So, how quickly do businesses invest in expanding their capacity so that we’re able to produce more to meet demand? And what do members of Congress do and the president, what do they do to perhaps help fuel that expanding capacity? We’ve seen the cost of shipping goods across the ocean rise dramatically. That’s caused a very large increase in the price of goods that we import and it’s put a lot of pressure on American firms who rely on being able to export efficiently, make profits off those exported goods. I think that one thing the globe could do to, you know, help tamp down some of those prices would be to think about removing tariffs.

Ben-Achour: We’re seeing a lot of demand for goods, like you mentioned, and people haven’t quite switched back to services yet. What are you seeing? I mean, when are people going to switch back to services? And the reason why that’s important, obviously, is that affects, you know, this surge in demand.

Stevenson: Right, that’s absolutely correct. I think that comes from a shift in how we live our lives. We’re staying home. People wanted more equipment to be able to do their work. The way I’m entertained, the way I work, all of that changed due to pandemic. At some point, you know, I think that that has to die down. We have the equipment we need. We have the new couch that we started pining after during the pandemic. And the hope is that COVID recedes enough that we actually want to do things like get out and about and go to in-person entertainment or eat dinner at restaurants. You know, we have 1 in 10 child care workers is missing right now from the labor force compared to what we had pre-pandemic. That’s not just about labor supply, that’s also about labor demand because parents haven’t fully returned to the workplace and to using child care. As more people go into the workforce, the kinds of services that support our working outside the home, demand for that will grow. There are still parts of the country right now where the hospitals are at capacity or near capacity. That’s holding back the ability for people to consume the kinds of medical treatments that they consumed that are not related to the pandemic. All of that, I think is still being held back by an ongoing pandemic. And I think that it’s really going to depend on the pace and trends of the virus itself as to when demand for services fully comes back.

Stevenson: Well, certainly, that is some of the fear. One of the reasons why inflation is problematic is because it does seem to redistribute [wealth]. And the question is, what will the people who lose from inflation do? And will they have enough bargaining power to be able to claw back some of their losses? So if we look at what’s happening with wage gains, it’s pretty clear that the wage gains are disproportionately happening at the bottom of the income distribution. They’re also disproportionately going to young people, people under the age of 25. And they are disproportionately going to millennials who change jobs, not those who stay in their current job. We’re not in a world where most people have, you know, a collective-bargaining unit that negotiates long-term contracts that’s able to really push in these sorts of inflation adjustments into their wages. And I think that’s why, ultimately, what we’ll see from this bout of inflation, that I do think is temporarily high, is a redistribution towards borrowers, people with a lot of student loans, people who have mortgages, away from lenders, and in terms of real wages towards younger, lower-income people and away from older higher earners.