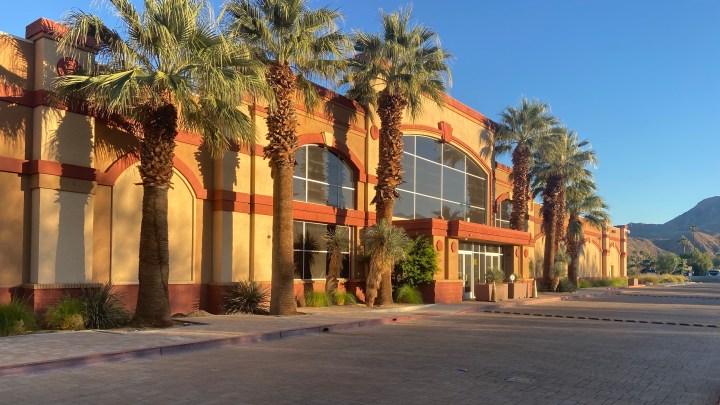 COPY
The site of a future Amazon facility in Cathedral City, California. The giant retailer has nearly doubled the size of its fulfillment network since the start of the pandemic. Amanda Peacher

The site of a future Amazon facility in Cathedral City, California. The giant retailer has nearly doubled the size of its fulfillment network since the start of the pandemic. Amanda Peacher
Listen Now

Online shopping has boomed during the pandemic, which meant huge growth for many retailers, but especially the biggest. Amazon has been building warehouses and fulfillment centers at a breakneck pace — nearly doubling the size of its fulfillment network since the start of the pandemic.

In Cathedral City, California, with a population of 54,000, a new Amazon facility will open this year. So what does a community like this expect when Amazon comes to town?

People come to Cathedral City for the mountains and expansive views of the Coachella Valley desert in the southern part of the state. The city’s economy is fueled by tourism.

“What is tourism? It’s a luxury good,” said Stone James, who works for the city government. We talked outside a coffee shop on a street lined with palm trees. Despite the great weather, golf courses and rocky canyons, the community suffers during economic downturns, he said.

About 1 in 5 residents lives in poverty, so Stone thinks 152 new Amazon jobs are a good opportunity for locals.

“They get full medical benefits, they get a 401(k) and they get 100% tuition reimbursement,” he said.

Those benefits are largely unavailable to many lower-wage workers — like Johnny Lemus, who chatted during his shift at a juice bar. “I was like, ‘Oh, I should go apply,'” he said.

Amazon will pay about $17 an hour.

“That’s the first thing I noticed, when people are saying, like, ‘Well, they’re paying real good, you know,'” Lemus said.

That higher pay can put pressure on other employers to increase wages. “We continue to challenge the status quo. We continue to grow,” said Chris Turner, an Amazon regional director.

But here’s the thing: When Amazon comes to town and starts hiring, it doesn’t necessarily equal more jobs overall, per Ben Zipperer with the Economic Policy Institute.

“What Amazon is doing is kind of changing the mix of employment,” he said.

Zipperer added that more people might migrate to warehouse positions and leave other sectors. “It’s attracting workers that already have jobs, say, you know, at a fast-food restaurant or at a retail store.”

The new Amazon building is a former Sam’s Club that’s been vacant for 16 years, right across the street from Barrel District Pizza, Bar & Kitchen, where Shelli O’Rourke works.

“We’re really happy to see what it brings and, you know, that I get to return my packages superclose now too,” she said.

Amazon says it plans to donate goods rather than destroy them