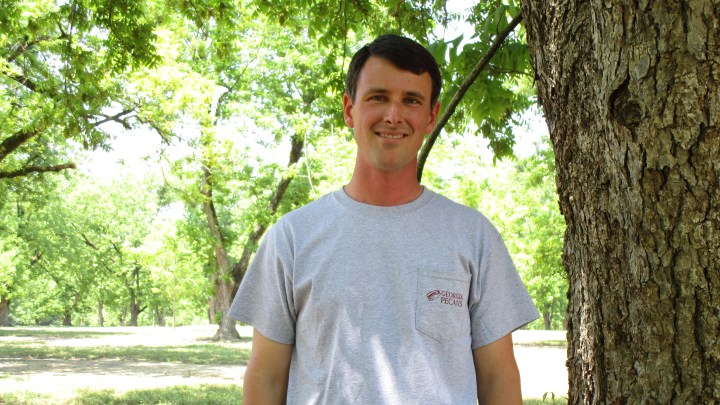 COPY
R.G. Lamar on his pecan farm in 2018. Daisy Palacios/Marketplace

Despite businesses of all sizes doing what they can to fill job openings — including raising wages and increasing benefits — they are still struggling. A mix of pandemic-related circumstances has caused the labor shortage, and it is increasingly becoming a business’ biggest challenge.

R.G. Lamar is president of Stuckey’s Corp., a convenience store chain. Lamar is also a third-generation pecan farmer whom we met a few years ago on a reporting trip to Georgia.

Lamar spoke to “Marketplace” host Kai Ryssdal about the challenges he’s facing hiring people at his pecan-shelling and candymaking facilities in rural Georgia. The following is an edited transcript of their conversation.

Kai Ryssdal: So, look, let’s set the stage here: We were down there three and a half or four years ago in Hawkinsville, Georgia, walked amongst the pecan trees. And one of the things you got to talk about, as we were talking about the state of your industry, is how dependent on China you were and how you really kind of wanted to diversify. So, talk me through the last three years in your pecan business.

R.G. Lamar: So, I think we had just gone into the tariff war last time we talked. And China had put tariffs on our product. We went from selling pecans for nearly $3 a pound, to last year, we sold most of our crop for less than $1 a pound. And that obviously had a big impact on our bottom line. So, you mentioned that I was looking for ways to diversify then, and we have really pursued that in a big way. With my business partner, Stephanie Stuckey, we bought her father out in Stuckey’s Corp., the old convenience store chain that you probably know.

Lamar: And then we went and bought a pecan-shelling facility and a candymaking factory. I’ve picked my family up from Hawkinsville, where we’ve lived my whole life, and moved near Augusta, Georgia. And we’re now running a candy factory and pecan-shelling plant.

Ryssdal: So, in the face of a tariff war and what would turn out to be a global pandemic, you kind of leaned in and said, “Listen, we’ve got to grow and expand and figure out how to do things bigger.”

Lamar: Yeah, that’s right. And you know, for us, a lot of it was — in agriculture, you often find yourself just taking a price, and the price you’re offered is affected by things you have no control over. And so, it’s attractive to me to still be in the pecan industry, but in a way that we’ve got a little bit more control over whether we succeed or fail.

Ryssdal: Talk to me about labor costs for a second, specifically in this economy right now. Because as you know, as a small businessperson — or I don’t know, maybe you’re a medium businessperson now — labor is a challenge, let’s say.

Lamar: Yeah, that has been extremely difficult. And the plant that we bought is in a very rural area, so there’s not a huge pool of labor here to begin with. But we rolled out a new compensation program and brought everybody up to more what we thought was market rates. But just as we were doing that, market rates were going through the roof. So, we have not found a whole lot of solutions. I mean, we found with Stuckey’s, there’s a tremendous potential for us. But we have a sales funnel right now full of leads that we’re just not even touching, because we don’t have the capacity to supply them, because we can’t get the people to make the product.

Ryssdal: Would you do it again?

Lamar: Yeah, yeah, I would do it again. And I’m optimistic. You know, I do think that with the labor force we have, with a little bit more investment, we can take these same people and increase production with some automation and things like that. So, I think there’s a way forward for us, but it’s just going to take longer than I wanted.

Ryssdal: So look, the economy’s doing pretty well. The pandemic, you know, we’re coming through it in whatever fashion that looks like, wherever you are in the country. Do you feel at risk for your business until we get through the pandemic? Or are you going to be all right until we get to that point?

Lamar: Well, the crazy thing about this pandemic is that consumer demand has been soaring. So, I actually am very optimistic about our business right now and the demand we’re seeing. We just have to figure out all these labor and supply chain issues.

Ryssdal: Oh, is that all? Is that all you got to do?

Lamar: That’s all. Yeah. Like I said, I’m optimistic, Kai.