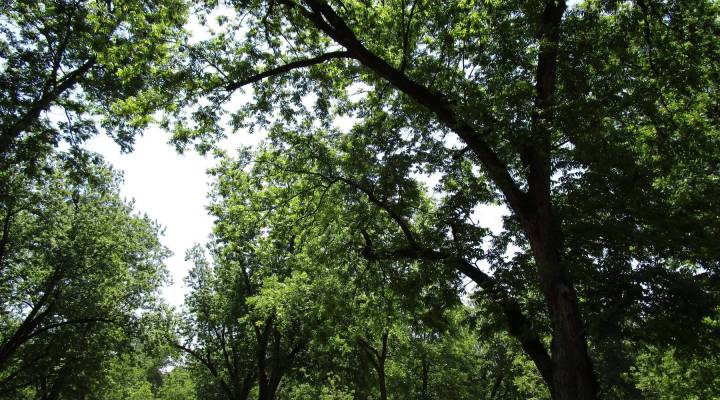 You may have been following a trip we took to the South recently to look at manufacturing in this economy and how it’s changing. Tariffs, counter-tariffs, this trade war — we got into it all with a textile company that’s had to reinvent itself, an iron foundry welcoming a lot of these changes, and a salesman turned business owner who’s determined to make stuff in America.

Something else that came up? It’s not just manufacturing that these tariffs are affecting. Agriculture could be taking a pretty big hit, too. So, that got us driving across central Georgia to Hawkinsville and the Lamar Pecan Co. Following in the footsteps of his dad and grandfather, R.G. Lamar is proprietor. And, because first things first, click the audio player above to hear Lamar tell Marketplace host Kai Ryssdal the correct pronunciation of “pecan.” They also took a walk around the orchard where Lamar grows nothing but pecans, the only major nut grown naturally in North America.

Kai Ryssdal: How many trees are here? How big is this?

Ryssdal: Just cause? Is that the roads with pecan trees?

Lamar: For trees this size and this age, yeah, they have to be planted pretty far apart.

Ryssdal: I mean, these are great trees. So these things hanging down, are those the flowers? Is that what happens?

Lamar: Exactly. So, right here, these are called catkins — that’s the male flower.

Lamar: Yup, and then if you’ll look at this … it’s not like an almond flower. You can see it from anywhere, but that little bitty guy there … those are the little pecan flowers. See, there’s four or five of them there.

An up-close view of catkins, or the male flowers on the pecan tree that produce pollen, which is essential for female flowers to produce pecan nuts.

Georgia pecans are incredibly popular overseas. China, in particular, which is complicating Lamar’s life. Because on one of those lists of retaliatory tariffs that Beijing has put out was an extra 15 percent on American nuts.

Ryssdal: How do you harvest these things? You can’t just wait for them to fall to the ground, right?

Lamar: No, exactly, yeah. So we’ve got a big machine very creatively called a tree shaker. These trees … I guess you can’t see them on the radio, these trees are over 100 feet tall. So we shake the trees. The big trees like this, we have to shake each individual limb, actually. The smaller trees, we can do the whole tree. But we shake it to the ground and then we have equipment that blows and sweeps them into rows and then equipment that picks up the row.

Lamar: So it depends on where they’re headed. Obviously in this country, we don’t have much of an appetite for in-shell pecans the way they do, say, for ballpark peanuts that you shell by hand. We don’t have that here. In China, that’s really popular actually. So if they’re going to China, we just put them in fifty pound bags and ship them overseas to the Chinese customers. If they’re staying here in the U.S., then we send them to processing plants in Georgia and Texas, mainly, and then take the shell off.

Ryssdal: How much your market goes to China?

Ryssdal: Well tell me more … because that was an interesting little smile you got on your face.

Lamar: Well, you know, obviously with the potential trade war between the U.S. and China and currently existing the extra 15 percent tariff that China has put on pecans. When we started 10 years ago shipping to China, the tariff was 24 percent.

Ryssdal: You started 10 years ago shipping to China and it’s already 60 percent of your business?

Ryssdal: So when you started 10 years ago was 24 percent? Worked its way down, the tariff did, to what? Before the latest round.

Ryssdal: And then you wake up one morning and all of a sudden 60 percent of your product is 15 percent more expensive?

Ryssdal: What did you do? You’re a guy running a small business.

Lamar: Well my first knee jerk was, okay, this isn’t as big of a deal because ten years ago it was 24 percent. Now we’ve gone from 7 to 22. So we’re back to still less than where we started. But the difference is, when we started, there was sort of a backdoor into China through Vietnam. Pecans are the only commodity that takes that route. Pretty much all nuts go through that route.

Lamar: Exactly. And so that’s why the 24 percent didn’t make a big difference then.

So, the gray market thing is actually a loophole that led a lot of American nuts through Vietnam first and then on to China virtually tariff free. The Chinese used to be okay with it because consumers there could get American products — pecans, in this case — at a good price. But that back door slammed shut when Chinese President Xi Jinping ramped up his anti-corruption campaign. So for Lamar and his nut-producing colleagues, there is no getting out of that 22 percent tariff.

Ryssdal: If it goes on for a while and it’s 22 percent for real, what’s that going to mean for you? You’re going to diversify away from the Chinese market? I mean, you can’t, right? How do you do that?

Lamar: Well, we realized all along for the last 10 years that having 60 percent of our crop going to one customer isn’t the safest, most diverse way to sell our products. We’ve been trying to diversify. And personally, what we’ve done is to create a consumer packaged brand, Front Porch Pecans. We really did it as a hedge in case something like this would have happened. You know, which would affect in-shell prices, especially Georgia. You know, I told you we send 60 percent, for Georgia, it’s about half, the U.S. sends about a third. So the reason Georgia sends so much more is because we have larger pecans, which the Chinese prefer because they’re eating them out of the shell. So we’re also more vulnerable then to any kind of political issues with China.

Ryssdal: So now what do you do? You just have to sit tight and wait and see what happens?

Lamar: Exactly. That’s all we can do. I was listening to a soybean farmer on the radio the other day and he said worrying about this is like worrying about the weather. It’s exactly what it feels like. We just … there’s not a lot we can do about this.

Ryssdal: But the thing is, unlike a soybean farmer who can choose each year what to plant, these trees are 110 years old and it’s not like you’ve got a choice. These nuts are coming whether you can sell them to China or not.

Lamar: You’re exactly right. And we love doing this. You know, I moved back here from a from a job in D.C. because I like the farm and I like what I do and the the type of lifestyle that affords us. I’m not going to do anything else if I don’t have to, but it is worrisome.

Lamar: One thing, as always happens with trade issues, the furniture is just going to get rearranged, I think. China is going to consume the pecans. The only other country that has the volume that they need is Mexico. Mexico sends most of their pecans to the U.S. right now. So they wouldn’t be coming here. So I think we would end up just selling more product domestically. There’d be demand there for that. We hope Front Porch Pecans will grow enough that we can rely on that somewhat too.