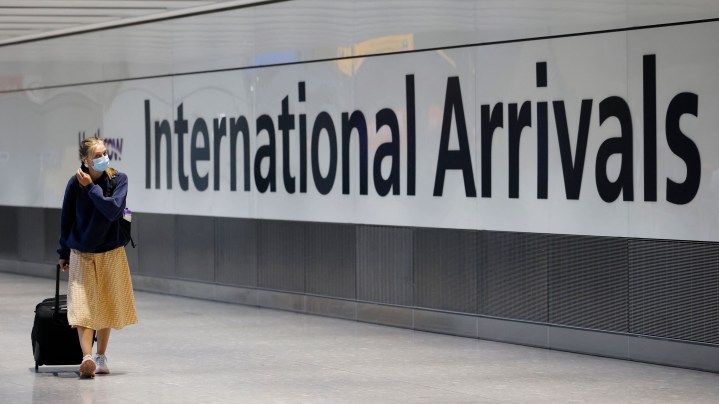 COPY
A traveler arrives at London's Heathrow Airport in August 2021. The U.S. may soon be lifting restrictions for vaccinated international travelers. Tolga Akmen/AFP via Getty Images

The Biden administration is easing international travel restrictions. Fully vaccinated foreign travelers from more than 30 countries, including China, India, Brazil and most of Europe, will be allowed to visit the U.S. by air starting in November. That’s giving hope to businesses that depend on those foreign customers.

For 12 years Priscila and Ray Briones have been running a sightseeing business in New York City, mostly for Brazilian visitors.

But during the pandemic, it’s been scaled way back. They found other work.

“I’m a Brazilian jujitsu instructor. So I’ve been doing part-time teaching self defense, Uber is what saved us. Other than that, you know, we’re still waiting,” said Ray Briones.

While they say it’s good news the restrictions are lifted, they aren’t planning to quit their other jobs.

“We can’t rely on tourism anymore. Because it’s so volatile and it’s going to be volatile for a while,” Ray Briones said.

They don’t expect business to recover until the end of 2022 at the earliest.

Still, Roger Dow, who heads the U.S. Travel Association, points out there were 80 million foreign visitors to the U.S. in 2019  before the pandemic.

“So even if it starts out slow, and we only get half that amount over the next year, that’s 40 or 50 million visitors,” he said.

He said U.S. tourist businesses in warmer areas are gearing up to host foreign travelers this winter.