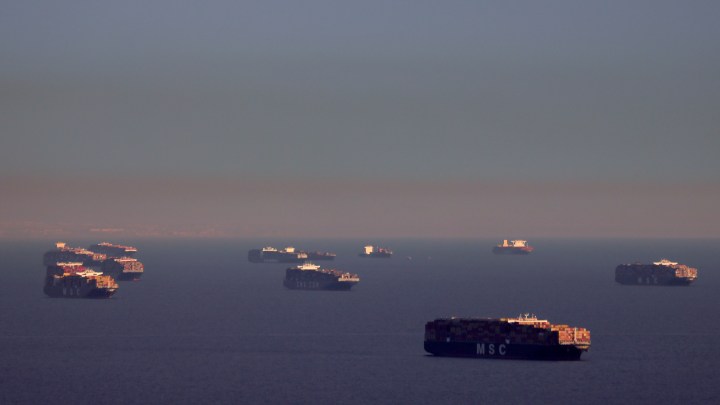 COPY
Container ships and tankers were anchored near the ports of Los Angeles and Long Beach in February. Currently, more than 60 ships are waiting to enter the two facilities. Mario Tama via Getty Images

Container ships and tankers were anchored near the ports of Los Angeles and Long Beach in February. Currently, more than 60 ships are waiting to enter the two facilities. Mario Tama via Getty Images
Listen Now

Sixty-two ships are lined up waiting to get into the ports of Los Angeles and Long Beach — that’s a new record. But those aren’t the only ports in the country dealing with congestion.

An airline pilot was flying over the Port of LA when he took a picture and sent it to his neighbor, Zac Rogers, a professor of supply chain management at Colorado State University.

“And there [were] 40 ships that I was able to count sitting in San Pedro Bay. I mean, he took the picture because he was thinking this is totally unusual,” Rogers said.

Lately, though, it hasn’t been. Ports all up and down California have been dealing with delays, and Rogers doesn’t think the congestion will go away on its own.

For one thing, he said, warehouse capacity should expand. Elsewhere in the country, the ports of New York and New Jersey are close to capacity.

“Yes, we are always acutely aware … space on the terminal is not infinite,” said Sam Ruda, a director at the Port Authority.

The port hasn’t had a big backlog of ships like LA’s, Ruda said. There were only four at anchorage Thursday, but getting trucks out of the port has been slow.

“So there have been periods when it’s difficult. The lines have been long,” Ruda said.

Importers may want to reconsider which ports they’re using, said Margaret Kidd, a professor of supply chain and logistics at the University of Houston.

“I mean, if I was running the import operations for a major corporation, I would certainly think about congestion and where there are pockets of ease in entering the U.S. markets,” Kidd said.

Savannah, Georgia; Charleston, South Carolina; and Houston, where Kidd is, could be good alternatives, she said — even for cargo coming across the Pacific.