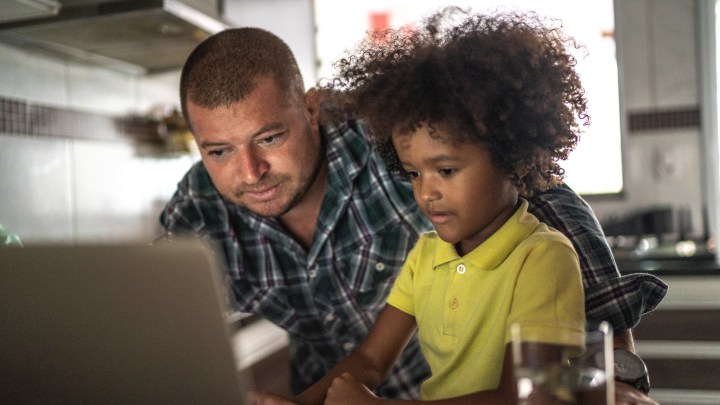 COPY
With more fathers at home during the pandemic, housework and child care has become more equal. FG Trade via Getty Images
Parenting in a Pandemic

With more fathers at home during the pandemic, housework and child care has become more equal. FG Trade via Getty Images
Listen Now

The shutdown of day care facilities and schools during the pandemic has caused all kinds of havoc for working parents — and it’s not over. With millions of unvaccinated kids returning to school as the delta variant spreads and many day care centers closed or understaffed, the issue of child care is still weighing on the economy — and heavily on moms.

Last month’s job report from the Bureau of Labor Statistics showed their work participation reversed in August, back down to a 33-year low, according to the National Women’s Law Center. It’s clear that the pandemic has been a big setback for working moms.

But when it comes to where dads figure into all of this, it’s more complicated.

When you hear statistic after statistic about how the pandemic has increased gender inequality and left moms holding the bag, you might wonder: What gives, dads?

And then you meet the Hossellmans.

“All right. We are baking a cake,” said Chris Hossellman, who is teaching his two daughters — 6-year-old Susanna and 4-year-old Eleanor — how to cook. And he’s learning a lot himself.

Until last year, Hossellman worked as a busy trial attorney in Southern California. His wife, Emily Hossellman, worked as an executive at a tech startup, so they relied on school, day care and nannies.

“We had built this very complex set of services making life workable for us, and all of a sudden, none of that was available to shore up our life anymore,” Emily said.

When the pandemic hit, Emily was busier than ever at work, but Chris’ job was flexible, so he took on most of the parenting and housework.

“I had to step into this role that I never foresaw myself taking and never really had the opportunity to test myself in,” Chris said.

“Chris actually really liked being the primary parent. Like, he was really good at it,” Emily added.

So when in-person work at his law firm began gearing up again, and Emily took a demanding new job at Google, they decided to make it permanent. Chris quit his job to become a stay-at-home dad.

“Yeah, and it has been great,” he said. “It was a lot less of a leap because we had kind of had this trial period of what that looks like.”

For this family, the pandemic was a catalyst to radically reorder the division of household labor, so Mom could not only stay at work but thrive in her dream job.

Now, it’s just one story. And maybe not an average one. But there are indications that what happened with the Hossellmans might be part of something bigger.

“It’s like a natural experiment,” said Daniel Carlson, a sociologist at the University of Utah. “You know, we’re just gonna throw all these people into the home, whether they would like to work remotely or not, and we’ll see what happens.” Carlson studied whether all that time at home changed things for dads.

“It exposes them to the realities of the rhythms of daily life in the home that they are probably not privy to previously,” he said.

So, dads did more domestic labor, and the share of couples that split the work equally increased. That helped protect mothers’ labor force participation — just not enough.

Though a higher proportion of couples shared the work equally, that still left plenty who didn’t. And that huge pile of extra work tipped disproportionately onto moms.

The pandemic has also presented an opportunity to chip away at that fundamental inequality, according to Titan Alon, a labor economist at the University of California, San Diego.

“I think if men really step up and kind of make this remote working flexible work arrangements, a typical part of professional employment, that’s the really big thing,” he said.

Because first, it puts more dads at home, where they’re more likely to share the work. Second, it starts to break down gendered stereotypes about what an ideal worker looks like.

“You know, what it means to step back from professional obligations to deal with something personal, to deal with something related to your family — if there’s a change in perception of what that says about you as a person, and how responsible you are, then I think this kind of thing can have a really big impact,” Alon said.

Chris Hossellman, the former trial attorney, has no desire to return to his pre-pandemic overloaded work life.

He’s looking for part-time or contract work that can allow him to remain the primary parent.

Parenting in a Pandemic
Tags in this Story
Share this Story